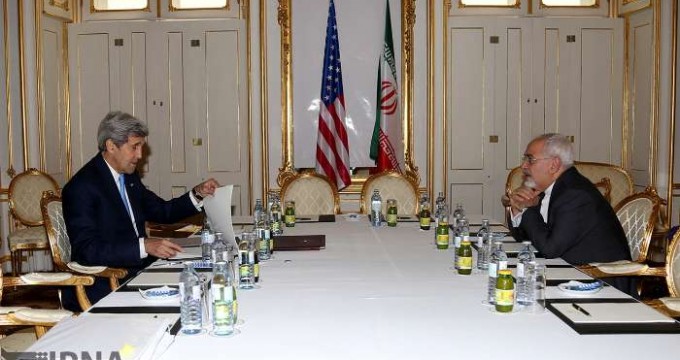 Kerry satisfied with his talks with Zarif

The US Secretary of State John Kerry said on Tuesday he was statisfied with his talks with Iranian Foreign Minister Mohammad-Javad Zarif.

The work is still under way, and the deal is expected to be signed a few days after the deadline.

An informed source close to the Iran-world powers talks in Vienna strongly dismissed an AFP report claiming that Tehran and the world powers have reached a system to give the International Atomic Energy Agency (IAEA) access to all allegedly suspect sites in the country, stressing that even the NPT additional protocol does not envisage access to military centers.

The US Secretary of Energy, Ernest Moniz, welcomed Head of the Atomic Energy Organization of Iran (AEOI), Ali-Akbar Salehi, upon his arrival at Coburg Hotel in Vienna, Austria.

Spokesman for the Iranian administration said on Tuesday he would not confirm reports that US President Barack Obama recently sent a letter to Tehran on the negotiations over Iran’s nuclear energy program.

No deal without accepting Iran’s rights

Iranian Foreign Minister Zarif has said upon arrival in Vienna that the other negotiating party is fully aware that there will be no ‘good deal’ without considering the rights of Iranian nation.

Iran’s foreign ministry spokeswoman strongly condemned a Saudi-led coalition airstrike that seriously damaged a Development Program office of the United Nations in southern Yemen, and voiced serious concerns over the deteriorating situation in the war-hit country.

US, Iran achieve progress on sanctions issue at nuclear talks

Iran and the United States have reached some progress on the issue of removing sanctions against the Islamic Republic, sources close to the nuclear negotiations told Sputnik on Tuesday.

Iran’s Minister of Economic Affairs and Finance Ali Tayyebnia announced that the country is ready to eliminate US dollar in its bilateral trade with other countries.