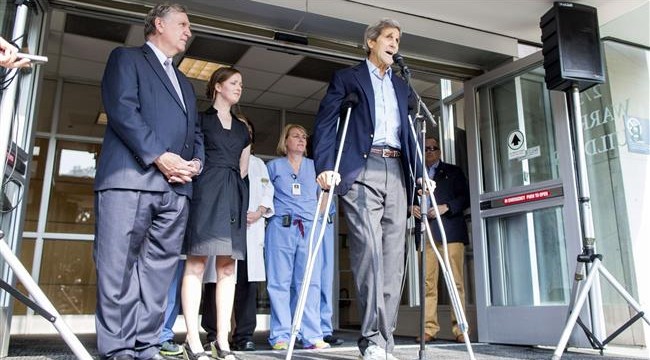 Kerry off to Vienna for Iran nuke talks as deadline looms

WASHINGTON (AP) — With next week’s deadline for an Iran nuclear deal fast approaching, Secretary of State John Kerry headed back to the talks in Vienna, Austria, on Friday, this time leaning on crutches.

On his first overseas trip since breaking his leg earlier this month, Kerry left Washington amid mounting debate over the wisdom of an agreement with Iran. Critics of the emerging deal accuse the Obama administration and its partners of conceding too much in the talks. U.S. officials insist their positions remain unchanged and that Iran must agree to their demands by Tuesday’s deadline.

Kerry used a mechanical lift to board his plane and walked through the converted Air Force 757 on crutches. He traveled with a State Department physician, as is customary, but this time also was accompanied by a physical therapist, officials said.

Kerry said Thursday he is “always hopeful” but would not say he is optimistic about getting a deal. Other officials have suggested the deadline may slip in the same manner that a March 30 deadline for a framework accord was extended two days.

A senior U.S. official, meanwhile, said an end was in sight that could lead to an agreement. The official said the U.S. believed that technical solutions exist to resolve every issue that remains on the table, but those solutions would require “very critical choices” by Iran’s leadership. The official was not authorized to discuss the negotiations by name and spoke on condition of anonymity.

Kerry’s meetings in Vienna will begin on Saturday. In addition to talks with Iran’s Foreign Minister Mohammad Javad Zarif, he is also expected to see French Foreign Minister Laurent Fabius. Foreign ministers from the four other nations at the negotiating table – Russia, China, Britain and Germany – are also expected to join in as they try to bridge differences between the sides on the limits Tehran must accept on its nuclear program in exchange for the lifting of economic sanctions.

But with Iran apparently backtracking on key points, the talks could go past the target date. In a speech on Tuesday, Iran’s supreme leader, Ayatollah Ali Khamenei rejected a long-term freeze on nuclear research and insisted that Iran will only sign a deal if international sanctions are lifted first.

He also repeated that military sites and Iranian nuclear scientists will be off-limits to U.N. experts, who would monitor Iranian compliance to any deal while trying to kick-start a moribund probe of suspicions that Tehran worked on atomic arms – allegations that Iran denies.