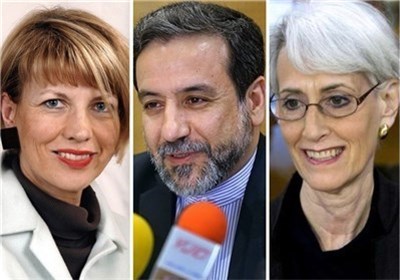 Iran, US, EU negotiators confer on wording the comprehensive deal

Abbas Araqchi, Majid Takht-e Ravanchi conferrred with Wendy Sherman of US and Helga Schmidt of EU on wording the nuclear deal.

Currently, deputy foreign ministers of Iran and G5+1 are engaged in negotiations in Vienna.

Arrival of Chinese and Russian foreign ministers has not been scheduled yet.