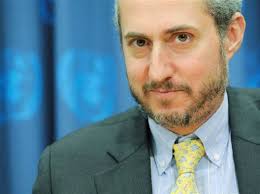 Tehran, June 25, IRNA – Spokesman for the UN Secretary General Stéphane Dujarric has said that regional powers including Iran have a key role to play in putting the political dialogue back on track in the war torn regions like Syria.

Dujarric made the remarks in his Wednesday noon’s briefing with reporters.

Iran’s Deputy Foreign Minister for Arab-African Affairs Hossein Amir-Abdollahian on Tuesday discussed latest developments in Syria in a phone conversation with de Mistura who said dialogues and consultations held in Geneva with various Syrian parties as well as world representatives including Iranian Ambassador and Deputy Permanent Representative to the UN Gholam Hossein Dehghani were positive and constructive.

Both sides underlined the importance of finding a political solution to end the Syrian crisis, he added.

De Mistura is scheduled to visit Iran for further consultations on Syrian crisis, within the framework of his regional tour.

Amir-Abdollahian, while emphasizing the continued support for the Syrian people and government in the fight against terrorism, said political solution is the only option to end crisis in Syria.