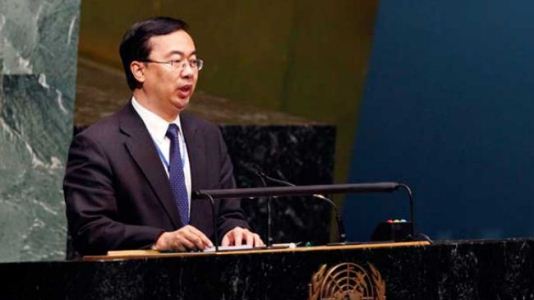 China has called on all sides involved in the negotiations over Iran’s nuclear program to show more determination for a comprehensive accord by the June 30 deadline.

The Chinese envoy, who was addressing a UN Security Council (UNSC) meeting on Nuclear Non-Proliferation (NPT), said that Tehran and the P5+1 group have demonstrated a strong political will for an early comprehensive agreement by holding extensive negotiations on the text of a final deal.

Wang further described as a “major breakthrough” the April 2 mutual understanding reached between Iran and the P5+1 – the United States, Britain, France, China and Russia plus Germany – over Tehran’s nuclear work in Lausanne, Switzerland, saying that the understanding constitutes a solid foundation for a comprehensive deal.

The Chinese official also reiterated that Beijing would “continue to take an active part in the negotiations and will work tirelessly for a comprehensive, long-term, proper solution to Iran’s nuclear issue.”

Representatives of Iran, the EU, the US, Britain, France, Russia, Germany, and China meet in the Austrian capital, Vienna, on June 12, 2015. (© AFP)

“As a major party to the negotiation, China has always played a constructive role in moving forward the negotiation with a just and objective position,” said Wang.

Iran and the six world powers are holding extensive talks to finalize the text of a possible deal over the Islamic Republic’s nuclear program by the end of June.

The two sides seek to strike a comprehensive final deal based on the mutual understanding reached in early April in Switzerland on the key parameters of such an agreement.