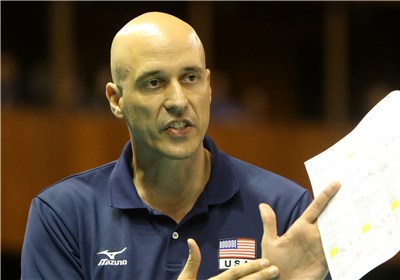 USA coach John Speraw: “We got beat by a better volleyball team”

We got beat by a better volleyball team by significant margin. They outplayed us in every facet of the game: block, defense, passing, serving, and offense. So there is only one thing we can do, and that is to learn from this volleyball match to hope that we can improve. We are a team and have some physical gifts, some big players who can jump high and beat the ball, but we have to play the entire game much better if we hope to be as a team as well-coached and skilled as Iran.”

Speraw on Iran and his message to Americans: “My first impression was that everyone here has been incredibly hospitable. Everyone has been very nice. They have gone out of their way to make sure that we had really nice experience here.

I think we have enjoyed it tremendously. We had the opportunity to get out into the city one day. We went to the [Milad Tower] and learning a little more about Tehran, and I think that is good for us. We went to a nice lunch on the hills.

I think we wanted to do those things because I think we are all aware that the portrait of the relationship between Iran and the United States is inaccurate in the media. Probably on both sides, my guess.

I think we have shown the same because America is a wonderful country with wonderful people too. Yes, it a great place, so the message we would bring back is this: it was a great trip and we look forward to coming here again.

And I think we have much better understanding of what the environment is both inside the arena and outside.”

Iran coach Slobodan Kovac added: “I want to say something about this. We want to return this hospitality (Mr. Speraw said about); last year we stayed in the USA for more than fifteen days. Everything was perfect. They gave us the maximum things to prepare for world championship.”

Kovac continued: “In the first match, the atmosphere surprised the USA. In this match, my players surprised the USA. I am happy. But four more steps are to be taken to qualify. Thanks to my players. We played like a team. All my players and my staff helped and we won two 3-0 results that was not easy. We tried so hard. We played a good volleyball. I respect the USA. They are the best team of the world because they are very disciplined and we should learn from them.”

Iran’s captain, Saeid Marouf: “I believe in my team and our two wins proved it. As I predicted, this match was more difficult than the previous one. Thanks to our substitute players that were really good. Iran was so good at both home matches. I hope this will last in the same way. We must forget these two wins as we did forget the last six losses before. We must try more now.”