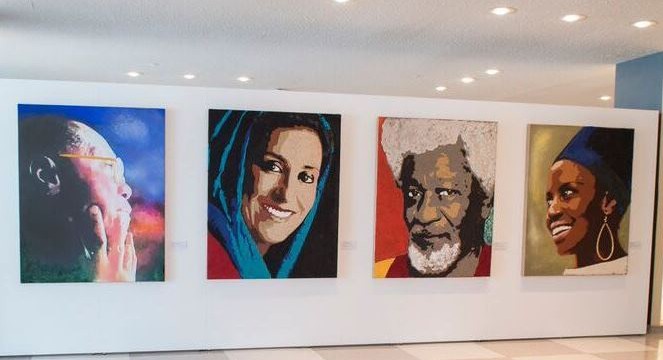 A portrait of the acclaimed Iranian actress Fatemeh Motamed-Arya is displayed besides 15 international figures at a multimedia exhibition titled ‘The Transformative Power of Art’ at the UN Exhibits in New York.

The exhibition features large fresco portraits of artists who have stood up for human rights, as well as sculptures and papier mache. “The latter, made with natural materials, symbolize the beauty of our natural environment and the need to protect it,” Fararu reported.

The 16 accompanying portraits represent people from all continents, who during their lifetime, contributed to the common good of humanity in one way or another and have transformed the way one thinks. The portraits are meant to project the power of generosity that touches the human heart and conscience. The men and women who are represented never lost sight of the most vulnerable.

Motamed-Arya, 54, is one of the recognized actresses of post-revolutionary Iranian cinema. She has been nominated nine times for the best actress award at the Fajr International Film Festival and won the Crystal Simorgh four times. She had a role in Rakhshan Bani-Etemad’ celebrated film ‘The Tales’ and played the lead character in ‘Nabaat’, Azerbaijan’s nominee for the Best Foreign Language Film in the 2014 Academy Awards.
Charitable Gesture
She is involved in humanitarian activities and helps raise funds for different charities, and contributes to world peace. Her latest gesture is putting up her Crystal Simorgh award, presented to her for the role of best actress in ‘Gilaneh’ in 2005, on sale to support people deprived of a home in Iran.

Motamed-Arya’s portrait is displayed along with the pictures of Chinese actress Gong Li, Brazilian photographer Sebastiao Salgado, Nigerian playwright and poet Wole Soyinka and Pakistani activist Malala Yousafzai among others.

The event also showcases paintings on the late British actress Audrey Hepburn, the late Russian painter Wassily Kandinsky and the late Indian filmmaker Satyajit Ray.
The exhibition, which takes place under the United Nations ‘2015: Time for Global Action’ campaign, is primarily aimed to raise awareness about climate change and the fragile ecosystems.

The sculptures that are exhibited are made of many natural elements provided by nature’s bounty from all parts of the world. They bear testimony to nature’s resilience in the face of human-made challenges.

It seeks to demonstrate that art creates bridges where politics divide. It was designed with the conviction that artistic impulse always carries seeds of redemption.

The presence of four cineastes among the artists at the UN Exhibits shows the importance of the seventh art, cinema, in preserving global peace and emphasizes the positive role of actors and filmmakers in contribution to global peace initiatives.
The exhibition will run till June 30.