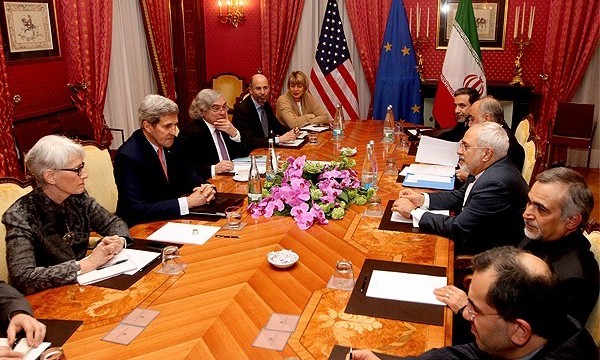 The Obama administration is considering appointing a “czar”-like official to oversee the enforcement of a nuclear deal with Iran, one of several options it is weighing to ensure the still-unfinished accord doesn’t unravel, according to sources familiar with the discussions.

It’s an idea that some argue is smart — even crucial — because of the multiple agencies, countries and international bodies that will be involved in the deal. People familiar with an earlier nuclear agreement with North Korea say having had such a position then would have helped, at least for a while, keep that doomed deal on track.
Story Continued Below
“It’s a sensible idea,” said Robert Einhorn, who served as assistant secretary of state for nonproliferation during the Clinton administration. “Call it a czar, call it a special representative, whatever it is. Call it coordinator for implementation or something like that.”
Creating such a role, however, may irk some Republicans who view the proliferation of “czars” and other special positions under the Obama administration as inefficient and duplicative, while also giving opponents of the ongoing nuclear talks a new focal point for criticism.
A comprehensive nuclear deal with Iran is due by June 30. In a preliminary agreement unveiled in April, Iran pledged to drastically reduce its nuclear program — which it has insisted is not aimed at making weapons — in exchange for relief from international sanctions that have hobbled its economy.

A number of sensitive topics remain unresolved in the talks, and it’s likely negotiators will miss the deadline. Obama administration officials have, nonetheless, begun preliminary planning for how an accord might be implemented.

An Obama administration official confirmed that one option under consideration is having a point person serving as the lead coordinator for implementation and enforcement. Other possibilities include beefing up staffing and funding at existing agencies, which range from the Treasury Department to the intelligence services, said a former administration official also familiar with the discussions. If a point person with oversight responsibility is named, the odds are he or she would be based at the State Department, which has been the primary agency in the talks under the leadership of Secretary of State John Kerry.

State Department officials would not give details or say exactly where the post-deal planning process stands, and they stressed that their primary focus remains on trying to actually reach an agreement — something that’s not at all certain. The administration also doesn’t like to use the term “czar” in describing people it places in high-level coordinating roles.

Still, “given the many details and elements of any implementation plan, we have been doing some advance planning,” said Marie Harf, senior adviser for strategic communications at the State Department. “In that planning, we are looking at all aspects of implementation, including how the [U.S. government] would be organized. If we reach a deal, there are many models for the way forward and we are looking for what will work best.”

In addition to Iran and the United States, the negotiations include Russia, China, Britain, France, and Germany. The United Nations and the European Union also have roles, and rolling back U.N. and EU sanctions on Iran would be a key part of the deal. Some reports have suggested a special multinational “dispute resolution panel” would be set up to respond to alleged breaches of the agreement.

Several experts and former officials said having a U.S. point person is a wise idea, but that it would need to be someone of high standing and with the full confidence of the president. That would signal on a political level — especially to the Iranians — how serious the U.S. is about enforcing the accord.

It would also send a message to the American bureaucracy to be efficient, not just in making sure that Iran holds up its end of the deal, but also in ensuring that the U.S. fulfills its promises, especially when it comes to easing sanctions. That’s especially important in the context of the longstanding “institutionalized enmity” between the United States and Iran, said Trita Parsi, president of the National Iranian American Council, a group that backs the talks.

“Both sides have built their bureaucracies to reinforce very antagonistic policies against each other,” he said, adding, “Because the technical aspect of this is so complex, the implementation of it is going to be so colossal it would be unrealistic to expect that this could be done without added manpower.”

Former officials involved with the 1994 agreement with North Korea say that, looking back, the U.S. should have been as disciplined and focused on implementing that deal as it was in trying to reach it. Although none said having a “czar” would have ultimately saved the agreement, several said that not having one in the immediate aftermath was a deficiency.

“You tend to lose focus after the agreement is reached, people tend to move on,” said Wit, who helped negotiate the 1994 deal. “Implementation is not a sexy thing to do.”

Stephen Bosworth led the Korean Peninsula Energy Development Organization, which was set up to help implement parts of the North Korea deal, and he said not having a point person to turn to was one of his “major frustrations.”

“We dealt with several people in the Clinton administration, especially in the State Department and the [National Security Council]. But there didn’t seem to be any designated ‘go to’ officer at a senior level,” Bosworth wrote in an email.

He argued in favor of having such a go-to person in the case of Iran, saying that the risk that people will lose focus and that the interagency structures built to deal with enforcement will fade away “is likely to be exacerbated by our political process as the agreement becomes fodder for partisan debate.”

Numerous Republicans in Congress remain opposed to the nuclear talks with Iran, and with just weeks left until the deadline, the clamor is getting louder.

Earlier this week, Sen. Bob Corker (R-Tenn.), who chairs the Senate Foreign Relations Committee, sent a letter to President Barack Obama saying he was “alarmed” over reports that the U.S. might not demand that Iran come clean about its alleged past nuclear weapons research and may agree to restrictions on inspections of Iran’s nuclear facilities.

Corker wrote that he understands “the dynamics that can develop when a group believes they are close to a deal and how your aides may view this as a major legacy accomplishment,” but urged Obama to walk away from the talks if Iran crosses certain “red lines.”

Kerry said Tuesday that the talks “remain tough” and stressed that the U.S. would not sign a bad deal.

But he also suggested that Iran would not have to fully account for its past alleged nuclear weapons research before a deal is inked or sanctions are eased, something that prompted accusations that the U.S. was backing off a key demand.

Sen. Lindsey Graham (R-S.C.), who is running for president, said on the Senate floor Wednesday that Kerry had told him that Iran’s past nuclear weapons research “is very much on the table.” Regardless, State Department spokesman John Kirby struggled to further clarify the matter during a contentious news briefing Wednesday, though he also insisted the U.S. was not making any concessions.

Mark Dubowitz, executive director of the Foundation for Defense of Democracies and a leading skeptic of the talks, said he wouldn’t be surprised if many in the GOP were wary of the idea of having a “czar” or similar figure to oversee the deal.

“The Republican perception of these special positions is that they haven’t worked, they’ve been a failure and they are used to try to create a perception of influence and of the U.S. government getting things done,” he said.

He admitted, however, that having one figure oversee the implementation would also make that person the focal point for attacks down the line — something the Obama administration may want to avoid.

“A great way to not have full accountability is to sort of disperse the accountability, particularly to contain it within some sort of amorphous institution,” Dubowitz said. “Politically, it’s probably easier than having it focus on one individual.”