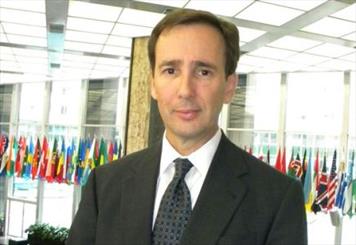 Enough time to reach agreement: US

Tehran, June 18, IRNA – The Persian language spokesman for the US State Department Alan Eyre says there is still enough time for Iran and P5+1 group of world powers to reach an agreement in nuclear negotiations which will be satisfactory to all parties.

To a question on whether US negotiating team has a plan on removal of anti-Iran sanctions, the spokesman refrained giving details and said, ‘Nothing has been agreed unless there will be an agreement on everthing.’

His comments were made as Iran and P5+1 group of world powers on Wednesday wrapped up the first day of the eighth round of negotiations in Vienna after six hours of discussions on a final comprehensive deal.

Araqchi said one of the unsettled issues is the simultaneous lifting of sanctions in accordance with Iran’s actions.

A senior US administration official said US Secretary of State John Kerry will travel to Europe this month for the final days of nuclear negotiations with Iran despite his broken leg.

The official said the 71-year-old former senator is eager to rejoin the talks in person before negotiators reach their self-imposed deadline of June 30 to wrap up a comprehensive accord.