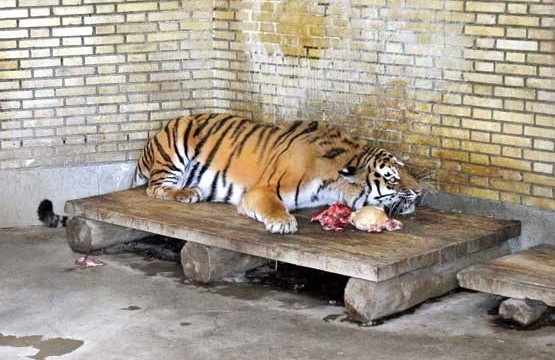 Quarantined Amur tiger to be homed in Qazvin

The conundrum concerning the fate of the quarantined Amur tiger may be coming to a happy ending.

Recently, officials at the Department of Environment suggested Qazvin Province as a possible permanent habitat of the tiger.

“Once experts survey the selected area and approve it, we will transfer the Amur tiger to his new home,” said Daryoush Jahanpeyma, head of Hygiene and Animal Diseases Office at Iran’s Veterinary Organization, according to IRNA.

In 2010, the former administration was involved in a swap deal with Russia, which saw two Amur tigers – also known as Siberian tigers – brought to Iran in exchange for two Persian leopards as part of an ambitious scheme to revive the big cats. In December 2010, the male tiger died of glanders in a zoo in western Tehran, which prompted officials to quarantine the female tiger to prevent an outbreak.

In March, during an interview with IRNA, deputy head of the biodiversity and wildlife office of DOE, Seyyed Majid Kharrazian, had said preliminary blood tests on the quarantined tiger showed had traces of a certain strain of glanders disease are transmissible to humans.

“The Ministry of Health is adamant about euthanizing the animal, but due to the rarity of the species the DOE demands further tests on the tiger,” Kharrazian said at the time.

Jahanpeyma stressed that blood samples will be taken from the tiger after being transferred to the sanctuary in Qazvin.