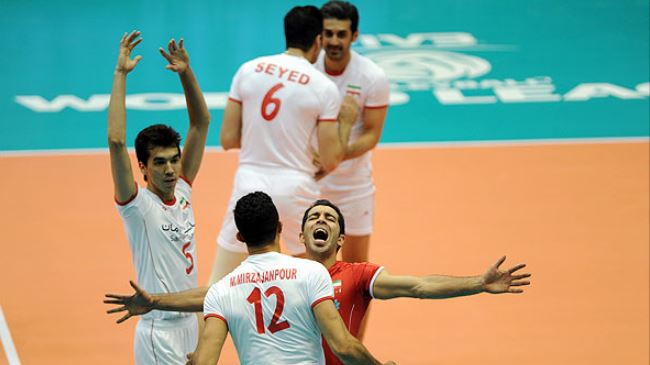 Great blocking and excellent serves lead Iran’s volleyball team to a historic victory against Russia in the FIVB World League.

Iran beat Olympic champion Russia 3-1 (20-25, 25-16, 25-19, 25-23) in Kazan on Saturday, increasing its tally of points to four in the fifth week of the major games as a struggling Russian side failed to deny the Iranians their first ever victory against the European giants.

Iran’s Mojtaba Mirzajanpour and Milad Ebadipour were most outstanding against the world’s No. 2, making few errors and gaining 14 point apiece. The most prolific player at the end of the day, however, was Russia’s Maxim Mikhaylov who collected 17 points with his great serves and blockings.

The Iranian team showed great character to come from behind and won three sets in row after the Russians took the first set with relative ease.

The most difficult of the trio was the fourth set where the Iranians ran up an 8-2 lead. The Russians fought back to within a point, but the towering Iranian men held on to win the set 25-23 and the match 3-1.

Iran had earned only one point from its four previous matches against the United States and Poland, losing 12 sets and winning only four. Iran and Russia are to face off again on Sunday in the same venue in the capital of Russia’s Tatarstan Republic.

An already dominant force in Asian volleyball, Iran has become a new powerhouse at the global level, with the FIVB ranking Iran 10th in the latest world standings in September 2014.