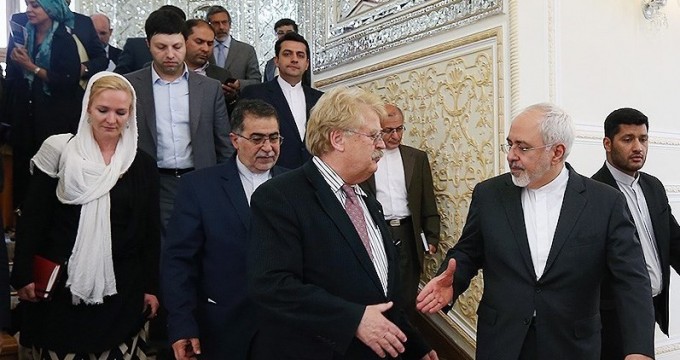 On June 5-7, a cross-party group of members of the European Parliament visited Iran as a confidence-building measure ahead of the June 30 deadline for a final deal on Iran´s nuclear program.

The fact that both sides took this opportunity seriously is illustrated by the level of meetings in Tehran and the presence in the delegation of a number of senior EU lawmakers. Among the European participants were Elmar Brok (German Christian Democrat), the chair of the foreign affairs committee, and Richard Howitt (UK Labor Party), the foreign affairs spokesman for the Socialists & Democrats, the second largest group in the EP. They met with the Chairman of the Parliament Ali Larijani, Foreign Minister Javad Zarif, his deputy Majid Takht Ravanchi, and other key Iranian officials, some of whom are directly involved in negotiations. These meetings allowed the European delegation to gain valuable insights into the state of play of the talks from the Iranian perspective.

Overall, the Iranians believe that reaching the deal by the deadline is possible, but they admitted that progress has been slow. Their key concern is the introduction of new demands by the US that go beyond the framework agreed in Lausanne. This complicates negotiations when only few weeks are left before the deadline.

The Devil in the Details

The success of the Lausanne agreement owed a great deal to the massive work done by the head of Iranian Atomic Energy Organization Ali Akbar Salehi and US Energy Secretary Ernest Moniz. The two who worked out many technical details, including those related to nuclear-related research and development (R&D). As a result, Iran has accepted limits on its R&D activities for the next 10 years, with a very detailed schedule of how Iran should operate its centrifuges during this period.

After Lausanne, however, and to the surprise of the Iranians, the US came up with the idea of limiting Iran´s enrichment of uranium to two percent. Since this limit was never raised in Lausanne, Iranians suspect that the US acted in bad faith, i.e. not raised the issue of two percent out of a concern that such a demand could prevent the deal and, consequently, the concessions Iran was ready to make to the P5+1 at the time.

Iranians accept as valid the principle of “nothing is agreed until everything is agreed.” Thus, in itself the introduction of new demands does not necessarily augur an inevitable break-up of the talks. But it complicates them, since this is a multilateral negotiation, and the introduction of new demands by one side can open a Pandora’s box as other sides also renege on their commitments. For example, Iranians can demand to increase the number of centrifuges they are allowed to run in Natanz from 5000 to, say, 7000. The other side would naturally object, wasting valuable time and undermining trust.

Another example of the US stepping outside the Lausanne framework is the demand to stop the mechanical tests of centrifuges. Such tests are part of the R&D efforts in Iranian universities. They have nothing to do with the production of the fissile material. To open the way for enrichment, gas needs to be injected into the centrifuge, but Iran has voluntarily decided not to do so, as long as negotiations are ongoing. So, there is no risk of enrichment. But banning mechanical tests would mean imposing unreasonable limits on R&D, which Iranians would never accept.

Some European partners in the P5+1, notably France, have seconded these US demands. Pursuing a more secure deal is in itself a legitimate goal, but the P5 +1 should be careful not to overplay their hand. There are limits to what Iranians are prepared to accept. And although they are clearly interested in a deal, they also have repeatedly made it clear they are not desperate to get one, if it is seen as infringing on their rights under the Non-Proliferation Treaty (NPT). It would therefore seem wiser for the P5+1 to concentrate their efforts on getting Iran to ratify the Additional Protocol to the NPT, or at least start applying it provisionally as a confidence-building measure.

And it would be healthy not to indulge in an overly legalistic approach to drafting the final document. No international political agreement is perfect in the sense of blocking forever all pathways to achieving a goal, if the other side has strong political will and incentive to achieve it. Otherwise, in the words of a senior Iranian official involved in the talks, it is not an agreement between equals, but an “act of surrender” by one of the sides. Since there is no evidence that Iran is seeking nuclear weapons, excessive demands are both unnecessary and counter-productive.

A credible explanation for this toughening of the US position is the Obama administration´s desire to manage the domestic and international opponents of the deal: Republicans in Congress as well as Israel and the Gulf monarchies. Indeed, the President Obama, after inviting the Gulf allies to do some introspection in his remarkable interview with The New York Times’ Thomas Friedman, spent a lot of time reassuring them about ‘”Iran’s destabilizing activities in the region.” The pinnacle of this effort was the Camp David meeting with the Gulf princes.

But, in the end, US has to decide what is more important: to achieve a deal with Iran that could potentially lead to a more functional relationship between the two countries, or appease its domestic and Middle Eastern constituencies. In fact, Saudi and Qatari adventurism in Syria and Yemen ought to make it clear for the administration that any ideas of a “new equilibrium” or power balance in the region that it might entertain will not work, because its allies are not interested in it. These Gulf allies want to keep Iran isolated, which has suited their interests for so long: why bother about domestic reform and empowering their own disenfranchised populations when the blame for any problem can safely be laid at Iran’s door? Unless the US is ready to fundamentally reassess its relationships with its Gulf allies, no amount of appeasement will work. But overzealous attempts to reassure the allies can undermine the prospects for a deal and a broader normalization of relations between the US and Iran.

In fact, the whole narrative of ‘concerned allies’ refers only to Israel and Gulf monarchies. But America’s closest allies are European nations, with which it shares common values, trade, and a long-standing security alliance. Three of them—UK, France, Germany— participate alongside America in nuclear talks with Iran. Yet their voice is virtually absent from the US debate on Iran, in contrast to the aggressive, well-funded Israeli and Saudi lobbying efforts against the deal. Instead of waiting for the outcome of the US internal debate, the EU must assume a leadership role in pushing for a deal that is so obviously in its interests. Perhaps after the EU lawmakers visited Tehran, their next stop should be Washington DC to make a strong case in the US Congress for a mutually acceptable and enforceable agreement with Iran.

This article was written by Eldar Mamedov for Lobe Log on June 12, 2015. Eldar Mamedov has degrees from the University of Latvia and the Diplomatic School in Madrid, Spain. He has worked in the Ministry of Foreign Affairs of Latvia and as a diplomat in Latvian embassies in Washington D.C. and Madrid.