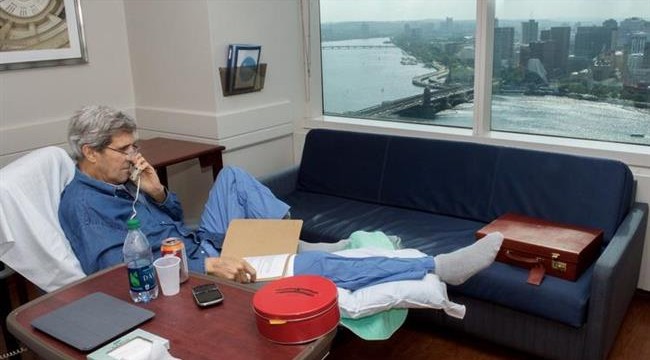 Despite leg injury, Kerry will travel to Europe for Iran nuclear talks

The Obama administration says US Secretary of State John Kerry will participate in the final round of nuclear negotiations with Iran despite his leg injury.

“When he needs to be there, he will be there,” a senior administration official, who spoke on condition of anonymity, was quoted as saying by the Los Angeles Times on Wednesday.

The official added that Kerry would travel to Europe later this month before June 30 deadline over reaching of a comprehensive nuclear deal.

Kerry, who is Washington’s top negotiator with Iran, suffered a leg injury during a bike crash in France last month.

The top US diplomat broke his femur and damaged a replacement hip when he fell off his bicycle.

American officials have not announced when he will be released.

During his stay at Massachusetts General Hospital in Boston, he has worked on the nuclear talks by phone.

The unnamed administration official also said the talks might be extended for a few days as the deadline is self-imposed and US officials would not object.

The official reminded that the two sides missed the March 31 deadline for a preliminary nuclear agreement, but that deal was reached several days later.

“I think everybody thought that was well worth it,” the official said.

The US and its negotiating partners are holding extensive talks with Iran to finalize a comprehensive nuclear agreement by the end of this month.

The latest round of talks was held in the Austrian capital of Vienna this week.