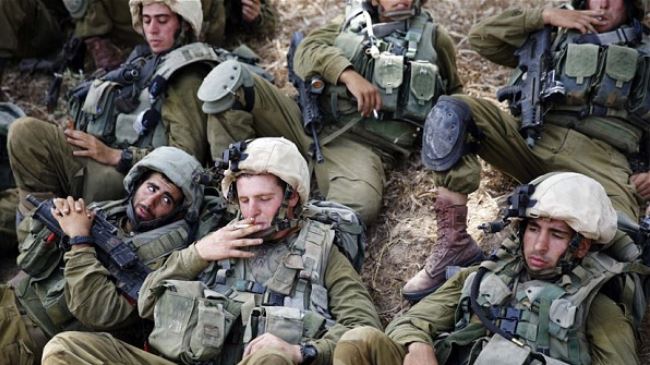 The Israeli military has recruited thousands of soldiers with criminal records, enabling them to request that their records be expunged, a report says.

A total of 3.8 percent of male and 0.3 percent of female soldiers conscripted last year by the Israeli army had criminal records, Haaretz reported on Tuesday, adding that the number of such recruits is rising.

The crimes committed by the newly-recruited soldiers ranged from drug offenses and theft to more serious crimes, including sex offenses, according to the report.

The report cited the case of a soldier at the Hatzerim air base who was not discharged from the army despite having a criminal history for raping two female soldiers.

According to the report, the military also provides a soldier with a criminal record with the opportunity to file a request for an official recommendation to the president that his record be expunged. Such requests are usually agreed to.

Israeli soldiers stand at a road next to their armored personal carriers during a training exercise near the Gazan border on June 7, 2015. (© AFP)

The revelation comes as Israeli military officials have recently reported a sharp rise in sex crimes among army soldiers over the past few years.

“This is a very troublesome phenomenon, and soldiers don’t understand how grave it is,” chief military prosecutor, Udi Ben-Eliezer, said.

The journal added that “infringement of privacy” offenses, some involving the collection and sharing of “compromising photographs” using messaging applications, make up 35 percent of the cases.

Last year, prosecutors said there had been 37 indictments issued against soldiers and officers for sex offenses, showing a 40-percent rise from the previous year.