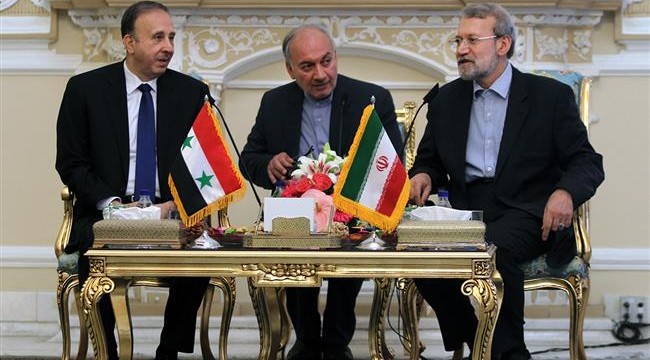 Iran’s Parliament (Majlis) Speaker Ali Larijani says the Islamic Republic will fully support the resistance of the Syrian nation under the current “difficult” situation in the Middle East.

“The Islamic Republic of Iran will spare no effort to support the Syrian government and nation politically and economically,” Larijani said in a meeting with Speaker of the Syrian People’s Assembly Mohammad Jihad al-Laham in Tehran on Monday.

Larijani commended Syrians for their resistance against the Israeli regime during recent years and said the Arab country is paying the price for supporting the resistance forces.

He added that the Middle East is currently in a complicated and shifting situation, saying, “Global powers intend to impose new equations on the region in line with their hegemonic policies by continuing to back terrorist groups in Syria and Iraq.”

The Iranian Majlis speaker also condemned the Saudi military campaign against and killing of the oppressed Yemeni people.

On March 26, Saudi Arabia launched its airstrikes on Yemen without a UN mandate. The military campaign is aimed at restoring power to Yemen’s fugitive former President Abd Rabbu Mansour Hadi, who is a close ally of Riyadh.

According to the UN, the conflict in Yemen has claimed the lives of about 2,000 people and displaced more than 500,000.

The Syrian speaker, for his part, said Saudi Arabia is the main enemy of the Muslim world, adding that the Saudi Wahabbism ideology has led to the spread of extremist and terrorist groups across the region.

Al-Laham said Saudi Arabia, Qatar and Turkey provided terrorists in Syria with military support in order to improve the Israeli regime’s security and added that the three countries’ policies increased insecurity and violence in the region.

He urged Muslim countries and the United Nations to play a more active role on regional issues.

The Syrian official also praised Iran’s material and spiritual support for his country over recent years.

The Syrian army and pro-government forces have been fighting foreign-backed militants since March 2011.

The ongoing militancy in Syrian has killed 222,000 people to date, the so-called Syrian Observatory for Human Rights says.