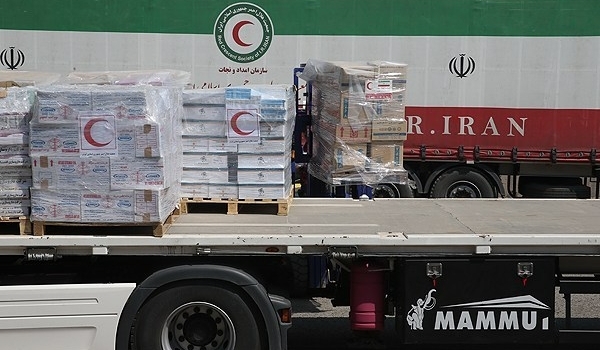 TEHRAN (Tasnim) – An official with Iran’s Red Crescent Society (IRCS) said international organizations have guaranteed that the country’s humanitarian supplies for Yemen will be delivered to people in the war-hit Arab country.

International bodies, including the United Nations and the International Committee of the Red Cross (ICRC), have completed the legal formalities guaranteeing that Iran’s relief supplies for people of Yemen will be delivered to them, Naser Charkhsaz said on Saturday.

He also pointed to an airborne consignment of humanitarian goods Iran has sent for Yemenis via Djibouti, saying the cargo was being unloaded in the African country in coordination with the UN and the ICRC.

Charkhsaz said Iran’s Red Crescent Society has also sent three representatives on board the plane to Djibouti to oversee the delivery of supplies and visit the camps for Yemeni refugees in the African country.

The Iranian plane, carrying 20 tons of canned food, landed in Djibouti on Friday.

An Iranian cargo ship had already dispatched 2,500 tons of food and medical supplies for Yemenis via Djibouti, where the United Nations oversees humanitarian deliveries.

According to Yemen’s Freedom House Foundation, the Saudi airstrikes have claimed the lives of nearly 4,000 Yemeni people so far while more than 7,000 others have been wounded, most of them civilians.
Meantime, the Office of the High Commissioner for Human Rights (OHCHR) revealed that 2,453 civilians have been injured, among whom 130 were women and 234 children.