A look at Iranian newspaper front pages on May 28

IFP has taken a look at the front pages of newspapers on Thursday and picked headlines from 18 of them. IFP has simply translated the headlines and does not vouch for their accuracy.

The Supreme Leader’s remarks in a meeting Wednesday with the MPs that government ministers should be treated respectfully and politely dominated the front pages of Iranian newspapers on Thursday. The Leader’s nuclear stances as well as calls for solidarity and harmony in government-parliament interaction made front-page headlines too. Also in the news was the possibility raised by Deputy Foreign Minister Seyyed Abbas Araghchi who said nuclear talks are likely to be extended beyond the July 1 deadline.

Abrar: A member of parliament’s Planning and Budget Committee has said that the Judiciary should deal with the previous government’s violations of the targeted subsidies law. 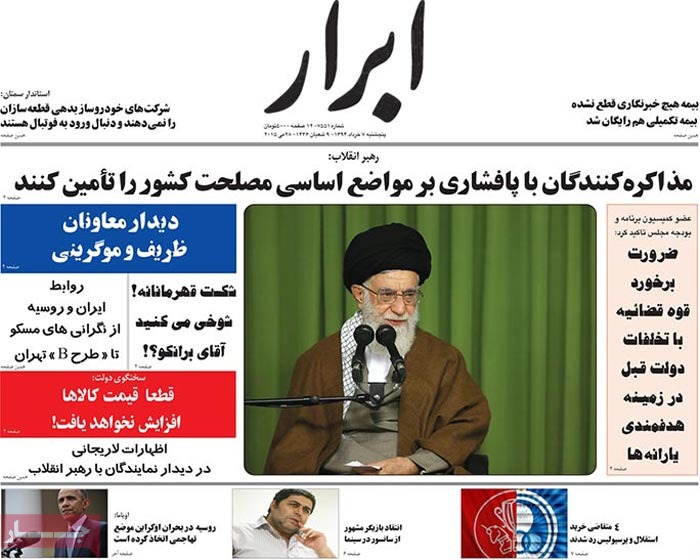 Afarinesh: “Development of a creative economy is a big step toward [materializing the objectives of] the resistance-based economy,” said President Hassan Rouhani in a Cabinet session.

Afarinesh: Nuclear talks are likely to be extended after June 30.

Senior Iranian negotiator Abbas Araghchi made the comment, adding that nuclear talks have become more complex because of the focus on the details. 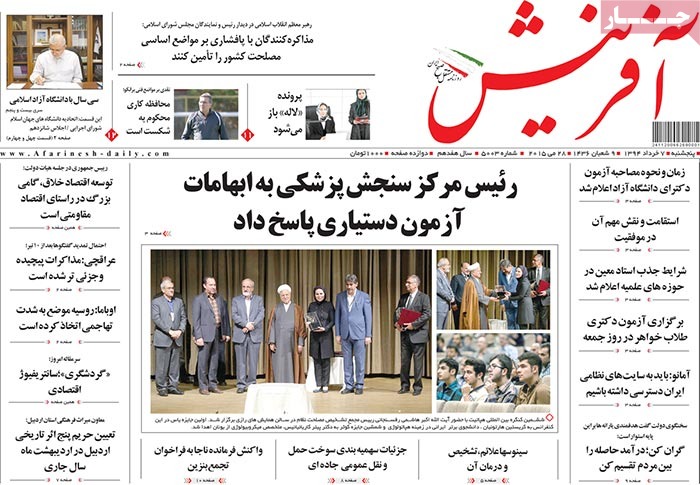 Afkar: The Judiciary chief has hit out at disrespect [some show] for the country’s nuclear negotiators.

Afkar: “A rise in gasoline prices will not trigger price hikes,” said the government spokesman. 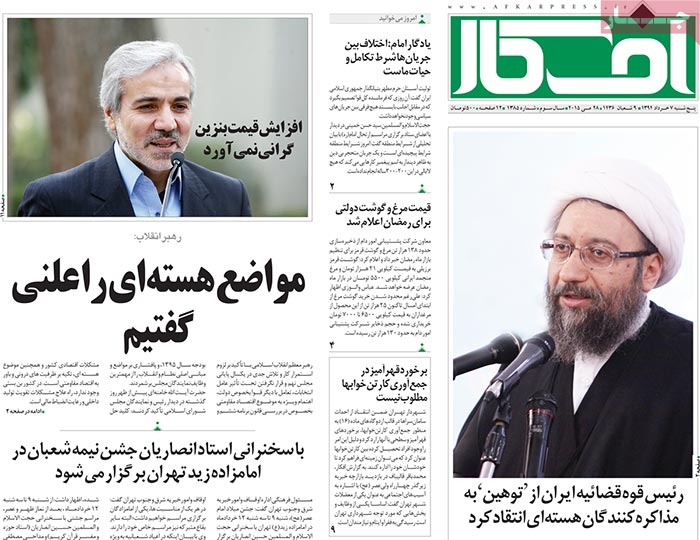 Aftab-e Yazd: “Boosting the domestic capabilities is key to settling the nuclear case,” said the Supreme Leader in a meeting with the MPs. 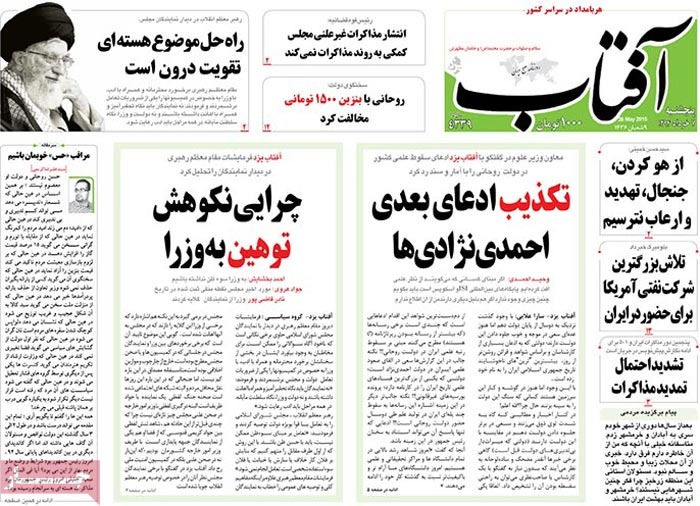 Arman-e Emrooz: Mohammad Reza Aref, a former first vice-president, has said that we will prove that the reformists will get 70 percent of votes in March parliamentary elections. 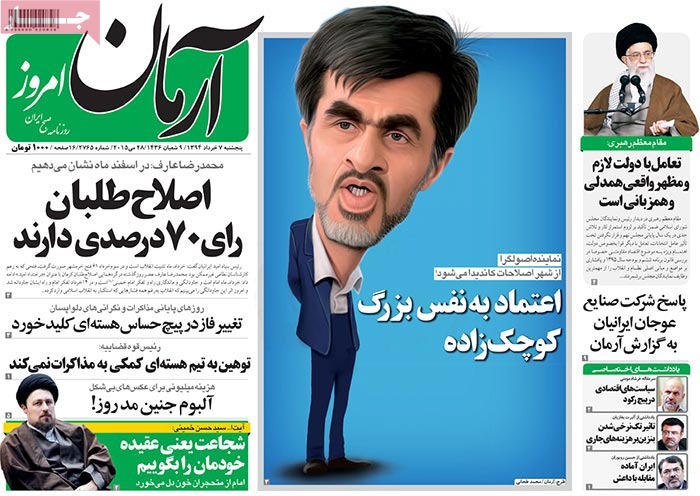 Asrar: Seyyed Hassan Khomeini, the grandson of the founding father of the Islamic Republic, has said that bravery is evident when we understand what is expedient and what our responsibility is, not [just] letting out shouts.

Asrar: “Interaction with government is necessary and is the real manifestation of solidarity and harmony,” said the Supreme Leader. 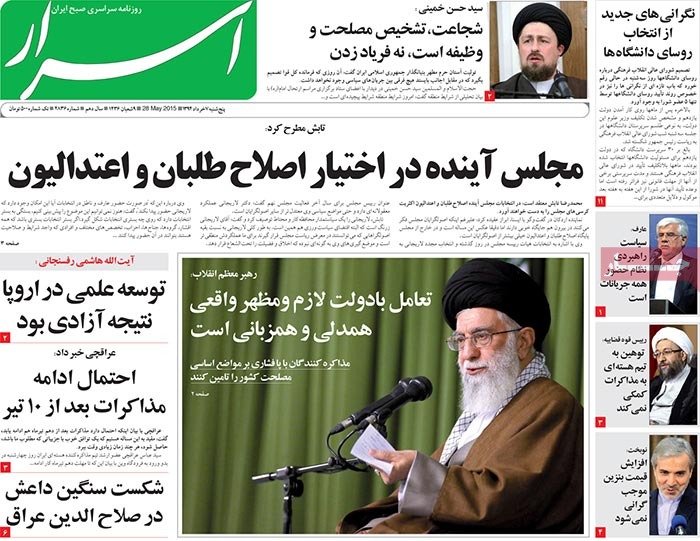 Ebtekar: In a meeting with the MPs, Supreme Leader Ayatollah Khamenei has asked for respectful and polite treatment of ministers.

Ebtekar: “Iran is the birthplace of the Islamic civilization,” said Chairman of the Expediency Council Ayatollah Akbar Hashemi Rafsanjani.

Ebtekar: “I have no difficulty meeting with foreign ministers of the Islamic countries,” said FM Mohammad Javad Zarif on the sidelines of an Organization of Islamic Cooperation meeting. 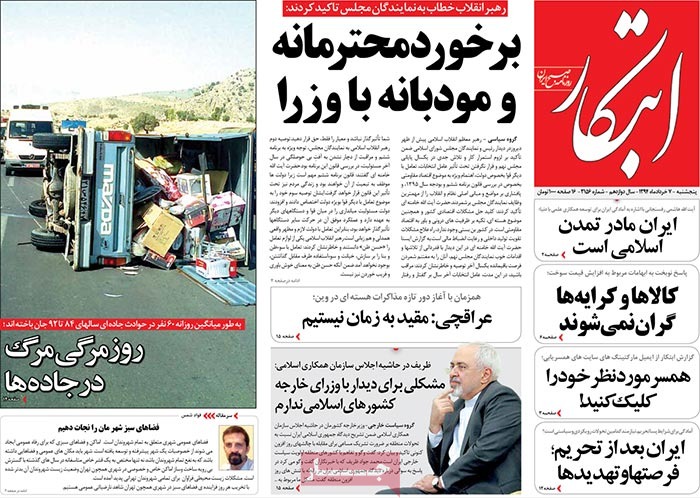 Etemad: “I have openly announced [the country’s] nuclear stances,” said Ayatollah Khamenei in a meeting with the MPs. 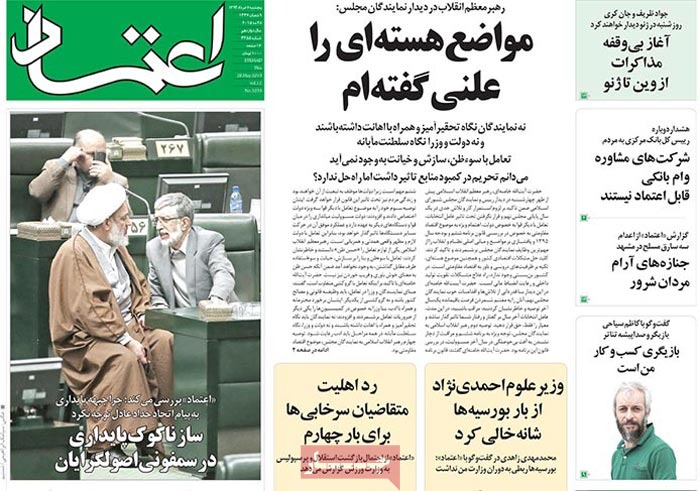 Ettela’at: “The Iranians are not divided over defending the core principle of the establishment and the country,” said the grandson of the late Imam Khomeini.

Ettela’at: Foreign Minister Zarif has said that Iran is ready to cooperate with all [nations] on fighting injustice. 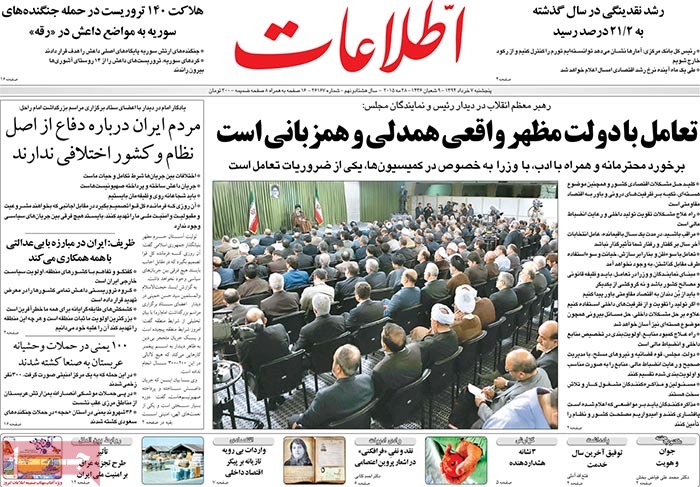 Ghanoon: “The nuclear team is moving down a path the Supreme Leader approves of,” said Ali Akbar Velayati, a former top diplomat. 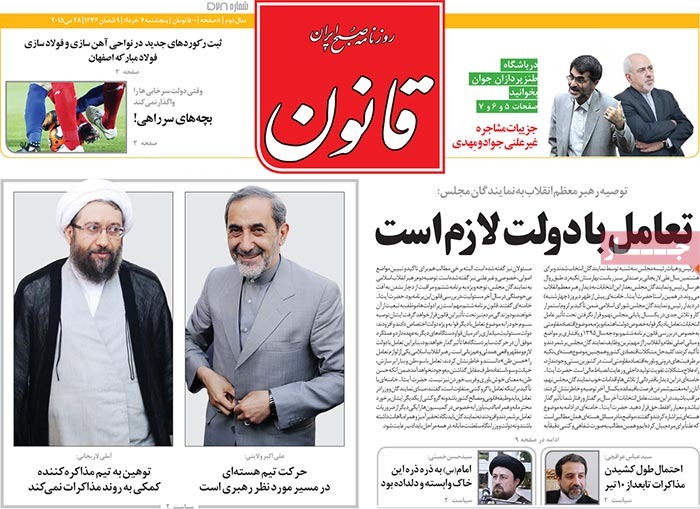 Hemayat: “The negotiating team should be aware of the enemy’s gamesmanship,” said the Judiciary chief. 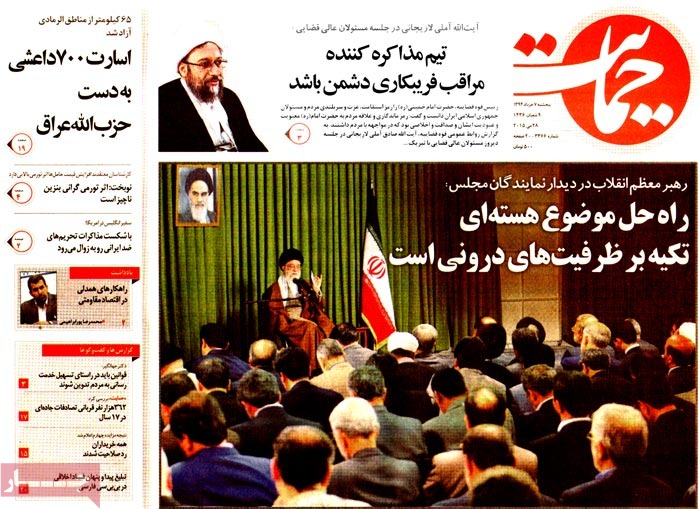 Jahan-e Eghtesad: In a meeting with the MPs, the Supreme Leader has emphasized the need for efforts to seriously deal with financial disorderliness. 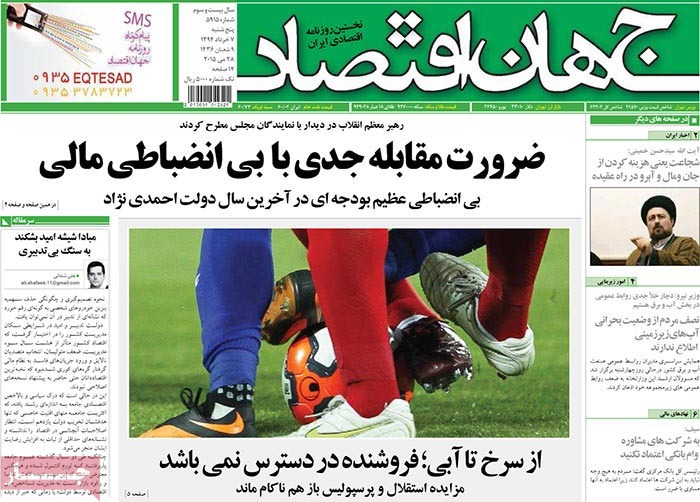 Jomhouri Islami: The Supreme Leader has called on government and parliament to show good faith in their interaction. 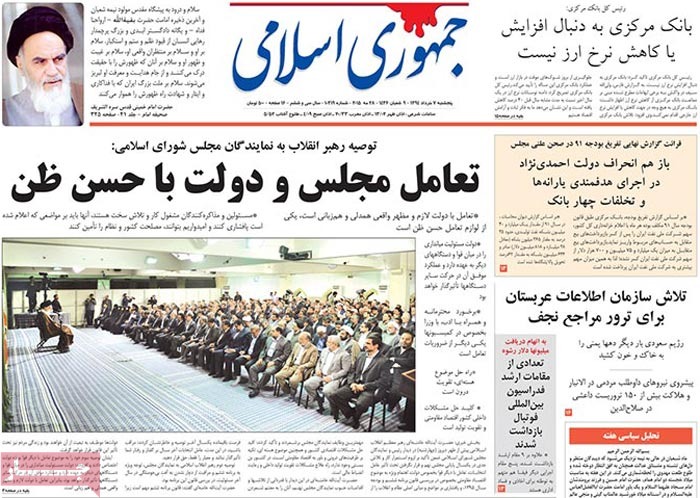 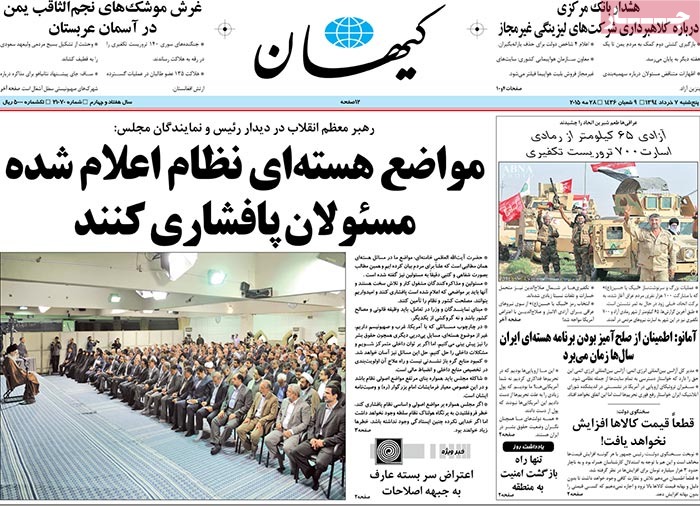 Mardomsalari: “I am ready to take a trip to Saudi Arabia,” said Foreign Minister Zarif. 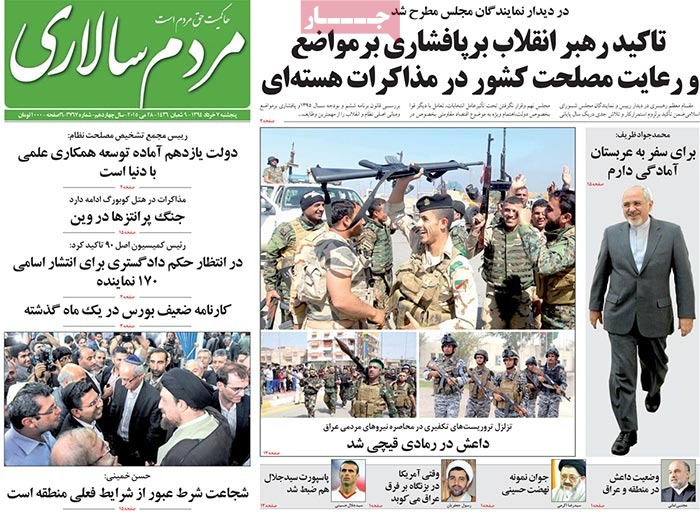 Rah-e Mardom: The Supreme Leader has called on negotiators to insist on the country’s core principles and serve the interests of Iran. 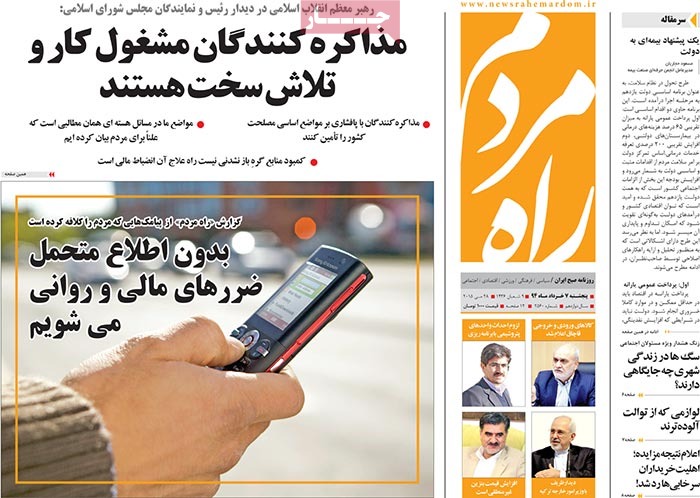 Rooyesh-e Mellat: “The MPs are not expected to show disrespect for the ministers,” said Supreme Leader Ayatollah Seyyed Ali Khamenei. 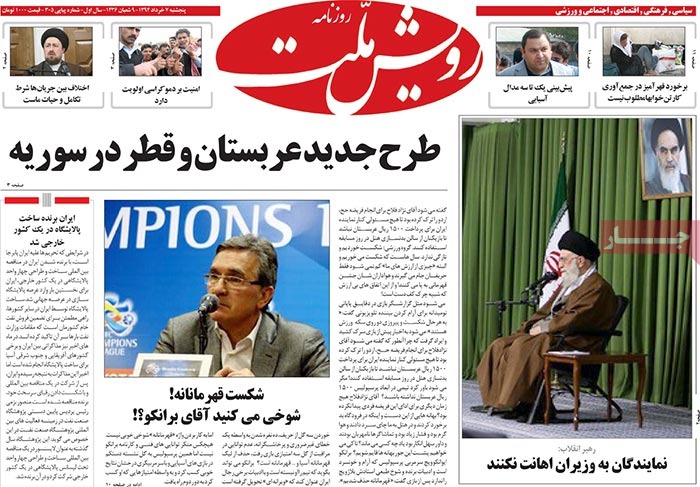 Sharq: “Corruption stems from the infiltration of governments in the economy,” said Sadegh Zibakalam, a political analyst, in an interview with the daily.

Sharq: “The release of parliament’s close-door sessions does little to help the progress of nuclear talks,” said the judiciary chief.