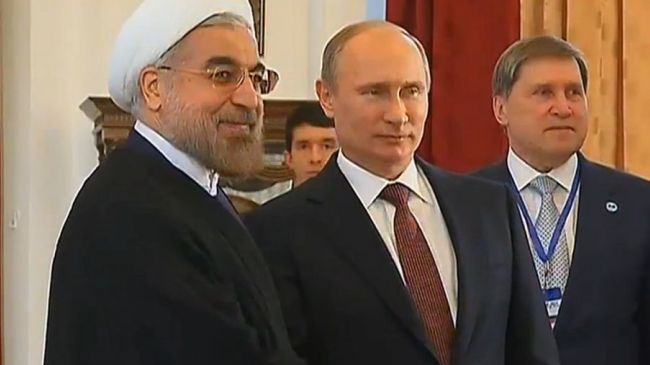 Six Iranian food companies are now allowed to export their goods to Russia.

“Deliveries can begin only after the completion of an additional set of requirements, which will guarantee complete safety,” she added.

This news is just the latest in the highly publicized, heavily scrutinized Russia-Iran deals and cooperation over the last year.

Most notably, we saw the massive oil-for-goods deal, and Russia lifting its own ban on the delivery of the S-300 immediately following the interim nuclear deal in April. Analysts have interpreted all of this Russo-Iranian collaboration in several different ways.

There’s a certain camp, including Tom Nichols, a professor at the Naval War College, who see the Moscow-Tehran relationship as a sign that US policy is having little impact on global affairs — especially on Russia and Iran.

Nichols told Business Insider back in April that the transfer of the S-300s is “yet another moment where Russia and Iran underscore the reality that they can do whatever they like, unconstrained by a disengaged United States.”

On the flip side, others see Russia’s quick pounce on Iran immediately after the nuclear deal as a sign that the Kremlin is afraid that its already isolated position on the global stage will further weaken if Tehran and Washington’s relations improve following the real deal.

“A few years back, I heard one of our diplomats say: ‘A pro-American Iran is more dangerous for us than a nuclear Iran.’ … If you look at this as a zero-sum game, Iran getting closer to the West is a weakening of the Russian position.”

“And for this it is necessary to bring a preventative blow, before the implementation of this nuclear agreement, to show Iran that we are the most reliable partner and the only great power you can rely on.” In any case, it’s unclear what will come out of the flurry of activity.

Despite all the deals and the fact that “Tehran may … consider ties with Russia to be a plan B in case negotiations over its nuclear program fail or do not lead to the results it desires,” Russo-Iranian relations are probably far from the beginnings of a deep poli-economic integration, according to Carnegie Moscow Center’s nonresident scholar Nikolay Kozhanov.

Various political and economic hurdles, such as Russia’s dialogue with Israel and the Gulf Cooperation Council countries, could prevent Moscow and Tehran from forming any sort of “comprehensive strategic alliance,” Kozhanov argues in a report on the revitalization of Russo-Iranian relations. “Russia and Iran must determine in which political spheres their collaboration makes sense and can be effective— in other words, where they can go beyond mere consultations,” he writes. “On certain issues, the Russian and Iranian positions are close, but it is not certain that the two will agree.

“Without clear answers to these economic and political questions, further progress on the dialogue between Moscow and Tehran is unlikely.”

To summarize, Kozhanov writes: “The intensity of Moscow’s current contact with Tehran is unprecedented in Russia’s post-Soviet history. Yet despite the potential for improvement, there are serious obstacles that may hamper or even halt cooperation.”

This article was written by Elena Holodny for Business Insider on May 26, 2015. Elena works at Business Insider. Previously, she was at the International Criminal Tribunal for the Former Yugoslavia in The Hague. She graduated from Columbia with a degree in economics in 2014.