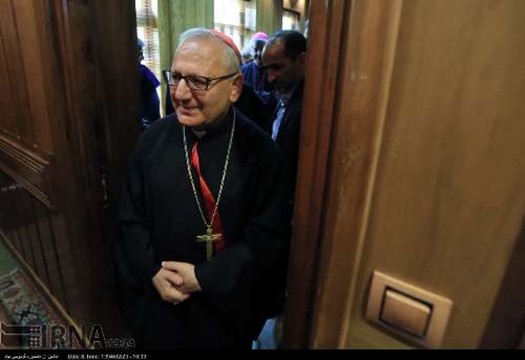 “Life of followers of divine faiths in Iran is unique”

Louis Raphael I Sako, the current Chaldean Catholic Patriarch of Babylon and the Head of the Chaldean Catholic Church, said Thursday the peaceful life of the followers of divine faiths in Iran is unique, adding other nations should take a lesson from Iran.

He further said both Christianity and Islam call on people to have dialogue with each other, adding the collective cooperation by the followers of all religions is needed to seriously deal with terrorism which is the enemy of all humans.

We need to stand united and avoid war and bloodshed, the patriarch went on to say, adding Iran which is a regional heavyweight can play a key role in efforts to establish peace and friendship in the region.
He also hoped Iran can help promote reconciliation in the world of Islam and rid the region of the current [tenuous] conditions.

Iran's religious minorities, Patriarch Louis Raphael I Sako May 22, 2015
Iran’s Rezaei returns to his military roots
How many international media have offices in Iran?