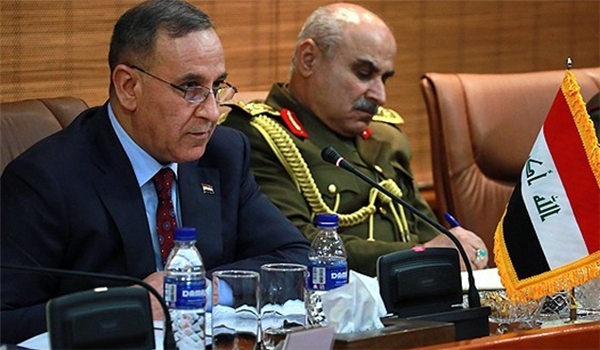 Al-Obeidi made the remarks in a meeting with Iran’s visiting Defense Minister Hossein Dehqan.

Al-Obeidi hoped that Iraq will be able to overcome enemies of Iraqi nation through Iran’s assistance.

‘We hope will bring abundant blessing for both Iran and Iraq, leading to further expansion of Tehran-Baghdad relations.’

Al-Obeidi briefed the Iranian defense minister on the threats posed by professional terrorists sponsored by the Saudi government.

Al-Obeidi said that expansion of cooperation between Iran and Iraq will definitely empower Iraq to overcome menaces of terrorism.

Al-Obeidi then outlined latest developments in Iraq in fighting terrorists and said through unity, integration and bravery of Iraqi armed forces and nation, the terrorists will not be allowed to gain their sinister objectives.

Dehqan arrived in Baghdad on Monday for talks with the Iraqi senior officials.

Heading a high-ranking defense delegation, the Iranian minister was welcomed by Chief of Staff of the Iraqi Armed Forces General Babak Zebari.

Dehqan is currently on a visit to Iraq at the invitation of his Iraqi counterpart to discuss bilateral, regional and international issues with the country’s high-ranking authorities.

Expansion of defense-security cooperation between Tehran and Baghdad as well as reviewing ways to launch a joint campaign against terrorism are among the objectives of Dehqan’s visit to Iraq.