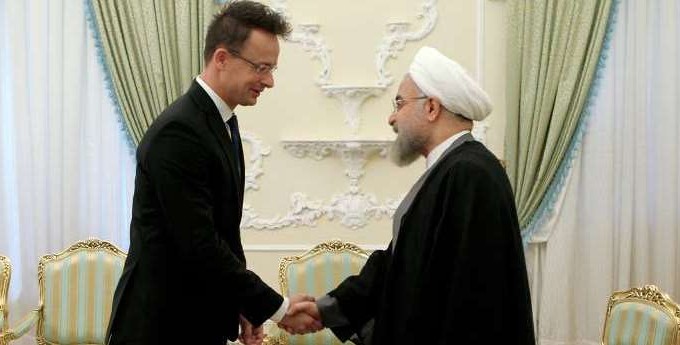 Nobody benefits from terrorism: Iran president

Iran’s President Hassan Rouhani says all countries should join forces to root out terrorism in the World, saying the scourge benefits nobody.

“To fight terrorism, all countries should become convinced that terrorism is to the benefit of nobody,” Rouhani said in a meeting with Hungary’s Foreign Minister Peter Szijjarto in the Iranian capital, Tehran, on Monday.

“To eradicate terrorism in the whole world and in the region, all countries should join forces to dry up terrorism by identifying its roots,” President Rouhani said.

He further referred to the ongoing Saudi aggression against Yemen, saying, “Today, numerous innocent people have lost their lives and homes in Yemen.”

Rouhani also stressed that the people in Yemen are in need of assistance from the international community, adding, “We hope to extinguish the fire of war in Yemen through cooperation.”

The Hungarian foreign minister, for his part, stressed the impact of developments in the Middle East on Europe, stressing that Iran has a key role in the establishment of security in the region.

Szijjarto also referred to the ongoing crisis in and Saudi aggression against Yemen, saying that Hungary sees no military solution to the conflict.

Saudi soldiers from an artillery unit stand behind a pile of ammunition at a position close to the Saudi-Yemeni border, in southwestern Saudi Arabia, on April 13, 2015. (AFP photo)

Saudi Arabia launched its military aggression against Yemen on March 26 – without a UN mandate – in a bid to undermine the Houthi Ansarullah movement, which currently controls the capital, Sana’a, and other major provinces, and to restore power to Yemen’s fugitive former President Abd Rabbuh Mansour Hadi, who is a staunch ally of Riyadh.

According to the UN over 1,600 people have been killed and more than 6,200 injured in Yemen since the conflict started there in late March. The conflict has also left some 450,000 people displaced.

President Rouhani further referred to nuclear talks between Iran and the P5+1 countries, saying the two sides can reach a deal on the Islamic Republic’s nuclear program.

“If the other party shows serious political will, we can reach a final agreement in the time set” for finalizing such a deal, he added.

Iran and the P5+1 countries – the US, Britain, France, China, Russia and Germany,  – have been negotiating to reach a comprehensive agreement over Iran’s civilian nuclear activities, and have set June 30 as the deadline for the conclusion of the deal.

He further said that the Iranian negotiators have participated in the talks with a “strong will.”

The two sides also touched upon ways to upgrade cooperation between the two countries in various fields.