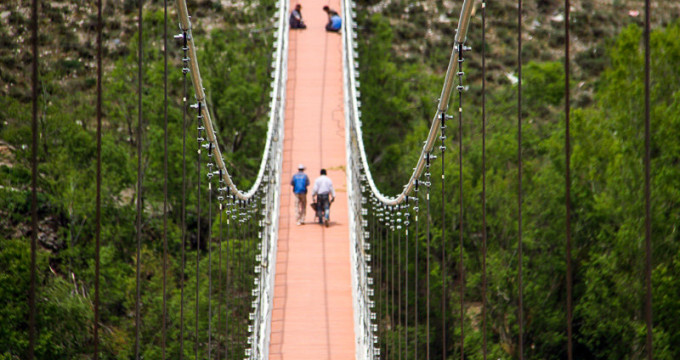 Iran has unveiled the Middle East’s highest suspension bridge in the lap of nature in the northwestern Ardabil province, known for its magnificent pastures, hot mineral springs and towering mountains.

The bridge over the river of Khiyav Chai in Meshginshhar is 345 meters long, suspended 80 meters above the ground.

The region, known for its pure natural honey, is undergoing a flurry of construction and sprucing up its face to attract tourists.

It is tucked away at the foot of the iconic Sabalan mountain which oozes a rich stream of hot mineral waters, attracting millions of tourists every year.

Iran is aiming to raise its tourism revenues put around $6 billion a year, which account for less than 0.5% of the world’s total income from the sector.

Iran has unveiled the Middle East’s biggest suspension bridge in the lap of nature in Meshginshahr.

The country is seen as one of the world’s top potential tourist destinations as it holds countless ancient sites. Iran is home to 17 historic sites listed by the UNESCO.

It has a diverse landscape and its tourism industry offers a myriad of recreational opportunities.