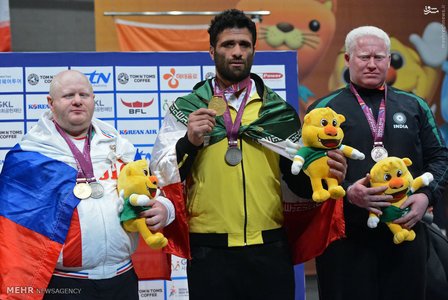 30 medals for Iranian athletes in 5 days of IBSA games

On Thursday, the fifth day of the field and track competitions, Sajjad Hosseini, the competent Iranian Class F12 javelin thrower recorded the 69.59 meters throw to gain the 15th gold medal of the Iranian team in the international competitions in his name.

In the same field, Seyyed Erfan Hosseini threw his javelin 56.41 meters to gain the 2nd place and the silver medal of the IBSA competitions.

The Iranian global team, too, beat Canada 6-2 to reach the games’ quarterfinal competition.

Earlier in the games, Sajjad Khaledan of Iran had received a total of 465 points to win the men’s 56 kilogram event, before his compatriots Ahad Javaheri Moghanlou and Hamid Pakbaz secured men’s 82.5 and 90kg gold with 640 and 590 points respectively.

Iran’s athletics team also enjoyed success with Saman Pakbaz winning both the men’s F12 shotput and discus, while Azerbaijan, Croatia and the United States earned a solitary gold in the field events in the Incheon Munhak Stadium.