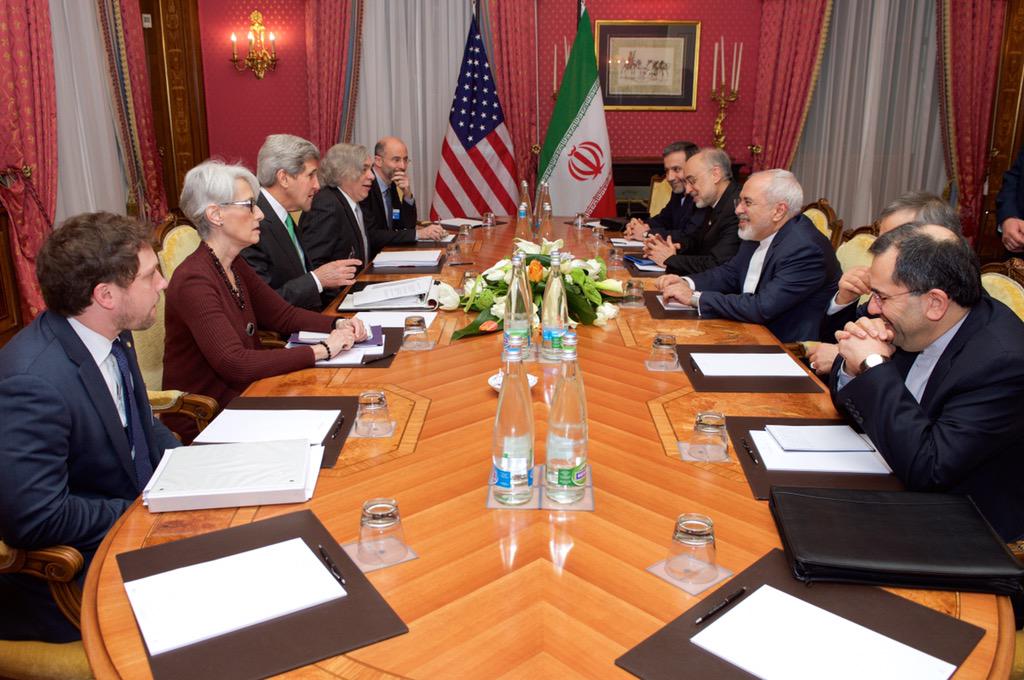 From Washington to Tehran: A legacy of failure

Five times the United States and Iran tried to mend ties — and failed.

The Obama administration has achieved the unthinkable. It has managed to cultivate a productive working relationship with one of the United States’ most dogged rivals: Iran.

Announced on Thursday, the interim deal to curtail Iran’s nuclear ambitions cuts its capacity to enrich uranium by about two-thirds for a minimum of 10 years, dramatically shrinks its stockpile of enriched uranium, and eliminates altogether its ability to produce weapons grade plutonium. In exchange, Iran will receive relief from the sanctions that have devastated its economy, so long as it continues to abide by the terms of the agreement. Should it fail to do so, the interim agreement includes “snapback” provisions that would immediately re-impose the sanctions.

What’s even more remarkable about the agreement, though, is that it leaves behind Washington’s three-and-a-half decade long record of failure with Tehran. Every president, from Jimmy Carter to George W. Bush, sought to improve relations with Iran. But these efforts were undermined by unanticipated actions on the ground, ill-timed leaks, failure to act at pivotal moments, misperceptions, and ideological shortsightedness. In each instance, when faced with an opportunity to improve relations with Iran, the White House balked. This is why the Obama administration’s persistence in seeking a deal with Iran that would hold its nuclear ambitions in check is so impressive.

The process of achieving this agreement was not easy. The Obama administration has faced challenges from all sides, whether it be from hard-line members of Congress, who have sought to scuttle the talks by imposing a fresh round of sanctions only to be blocked, or close American allies, like Israel, which broke diplomatic protocol to accuse the White House of selling out its allies.

Here is a look back at the presidents who — however valiant their efforts — failed to bring Iran and the United States closer together.

After the 1979 overthrow of the Shah of Iran, Mohammad Reza Pahlavi — widely viewed as a dictator and an American puppet — the Carter administration sought to smooth over relations with the new Islamic regime in Tehran.

According to Chris Emery’s 2013 book U.S. Foreign Policy and the Iranian Revolution, in mid-1979 the Carter administration approved a joint CIA-State Department proposal to share intelligence with Iran. The White House hoped that by sharing more sensitive intelligence — largely about Iraq’s military disposition and American concerns that the purging of Iran’s military following the revolution had disrupted the regional balance of power — with select individuals in the provisional Iranian government, it could “kick-start” high-level engagement and potentially support more moderate elements in Iran.

Unfortunately, just as this intelligence sharing effort got underway, on Nov. 4, 1979, regime hard-liners sabotaged the Carter administration’s efforts by seizing the U.S. Embassy in Tehran and holding 52 American diplomats hostage for 444 days.

During the 1980s, the Reagan administration also sought to improve relations with Iran, which had been locked in a brutal war with Iraq since September 1980. In 1985, the Reagan administration had grown concerned about two interconnected issues related to Iran: securing the release of American hostages held by Islamic militants tied to Iran in Lebanon, and the lack of American influence in Iran at a time when the health of Iran’s Supreme Leader, Ayatollah Ruhollah Khomeini, was believed to be deteriorating.

In mid-1985, Israeli officials helped the Reagan administration establish a back channel to a group of so-called “moderates” inside the Iranian government, who were represented by Akbar Hashemi Rafsanjani, as the Tower Commission’s report on the Iran-Contra affair found. After a protracted negotiation, in May 1986, top American officials, including former National Security Advisor Robert “Bud” McFarlane, traveled to Iran to make direct contact with the Iranian regime and — potentially — deliver a shipment of weapons in exchange for the release of the American hostages held in Lebanon.

This mission was a disaster. The Reagan administration failed to secure the release of any of the hostages, largely because the Iranians did not anticipate the arrival of top U.S. officials in Tehran, and were divided over how best to respond to the American approach. As a result, the Americans left Tehran empty handed. To make matters worse, in November 1986, Iranian hard-liners opposed to rapprochement with the United States leaked details of McFarlane’s secret trip to Tehran to the press. As Congress and the media began to dig into the story, it emerged that members of the Reagan administration had illegally diverted the profits from arms sales to Iran to the Contras, a right-wing paramilitary group that Congress had barred the United States from supporting. This resulted in the Iran-Contra scandal.

Iran’s defeat in the Iran-Iraq War in August 1988 was a major turning point for the regime. After eight years of war, in which more than 190,000 Iranians were killed and billions of dollars were spent, the Iranian regime became isolationist, eschewing its revolutionary zeal in favor of rebuilding its crippled economy and infrastructure. There were several reasons for this inward turn, including the death of Ayatollah Khomeini in June 1989, the emergence of Ayatollah Ali Khamenei as his successor, and the election of Rafsanjani, a moderate, as Iran’s president. After the transition, Khamenei tasked Rafsanjani with rebuilding Iran’s economy, improving its image internationally, and demobilizing its massive army, which was no longer needed now that the fight with Iraq had concluded. For the United States, this inward turn meant that Iran was no longer a major concern for policymakers, as Bruce Riedel, a CIA analyst during this period, said in James Blight’s Becoming Enemies.

This did not, however, prevent the new administration of George H.W. Bush from seeking to engage with Iran diplomatically. During his inaugural address, Bush reached out to the Iranian regime. “There are today Americans who are held against their will in foreign lands and Americans who are unaccounted for. Assistance can be shown here and will be long remembered. Good will begets good will. Good faith can be a spiral that endlessly moves on.” This implied that if Tehran were to help the United States secure the release of the remaining hostages in Lebanon, he would respond with gestures of goodwill.

However, as Bush’s National Security Advisor Brent Scowcroft pointed out in the 1999 book A World Transformed, co-authored with George H.W. Bush, when Rafsanjani personally facilitated the release of the hostages in late 1991, the Bush administration “didn’t do anything.” Goodwill, as it turns out, did not beget goodwill.

Under President Clinton, the United States’ relations with Iran were touch and go. In his first term, his administration cast Iran as a menace that — much like the Soviet Union before it — needed to be “contained.” This resulted in the implementation of a controversial policy known as dual containment, which called for the United States to increase its military strength in the Gulf region in order to “contain” Iran and Iraq. The problem, however, was that this policy demonized the Iranian regime as a threat to U.S. security interests at a time when Iran was actively demobilizing its military.

In 1997, the reform-minded Mohammad Khatami soundly won the Iranian presidential elections after securing a whopping 70 percent of the vote. He immediately reached out to the Clinton administration, saying that “all doors should now be open for such dialogue and understanding and the possibility for contact between Iranian and American citizens.” Seizing this clear opportunity, the Clinton administration exchanged a series of letters with the Iranian regime. “The United States has no hostile intentions toward the Islamic Republic of Iran and seeks good relations with your government,” and it wished to “lay a sound basis for better relations between our countries,” Clinton wrote.

The Sept. 11, 2001, terrorist attacks on the United States provided the Bush administration with a unique opportunity to improve relations with Iran. After the attacks, the Iranian people poured into the streets and the Khatami government made it clear that they were ready to help. According to Bruce Riedel, the United States and Iran worked together closely after the toppling of the Taliban in Afghanistan in October 2001 to help establish the post-war Afghan government. As Barbara Slavin, a leading scholar of U.S.-Iran relations at the Atlantic Council, reports in her 2009 book Bitter Friends, Bosom Enemies, “More than a dozen meetings were held between a handful of U.S. and Iranian diplomats from 2001 through May 2003.” This unprecedented level of cooperation even survived George W. Bush’s “Axis of Evil” speech, which lumped Iran with its archenemy Iraq.

In May 2003, Iran sought to trade western acceptance of its right to a peaceful nuclear program in exchange for assistance in stabilizing Iraq and cooperation against al Qaeda. Unfortunately, the Bush administration, buoyed by its apparent success in overthrowing Saddam Hussein, rejected Iran’s proposal, undermined the Khatami government, and ruined any chance of achieving a lasting deal. In fact, Condoleezza Rice, President Bush’s national security advisor at the time, did not recall ever seeing the Iranian proposal. Both sides canceled their meeting scheduled for May 25, as Slavin writes. This marked the collapse of any efforts to improve relations during the Bush administration.

What sets the Obama administration apart from previous administrations is that it has actually managed to sustain a dialogue with the Iranian regime for several years, which has resulted in a measurable improvement in its relationship with Tehran, especially since Hassan Rouhani’s election in 2013. While it is too early to tell if the final terms of an agreement can be locked down prior to the self-imposed June 2015 deadline, the remarkably detailed terms set out in the Joint Comprehensive Plan of Action offer quite a bit of hope. Of course, there are powerful groups in both Iran and the United States that will seek to block a final agreement, but the momentum of history appears to be on the Obama administration’s side.