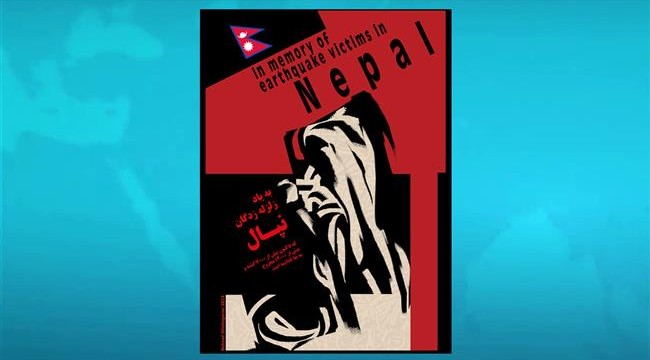 Iranian artist Behzad Shishehgaran has designed a poster to pay tribute to the victims of the recent tragic earthquake in Nepal.

Shishehgaran dedicated his new poster to the “quake-stricken Nepal.” Over 7,200 people have lost their lives in the natural disaster so far.

Shishegaran is one of the most prominent Iranian graphic designers and was the winner of Iran’s first Painting Biennial in 1991.

His works have been displayed in numerous group and solo exhibitions in Iran and other countries.

The 63-year-old artist is an honorary member of the Painters Association of Iran, and also served as a member of its board of directors from 2007 to 2011.

The death toll from the April 25 earthquake in Nepal has surpassed 7,200.

Meanwhile, people displaced as a result of the quake are being vaccinated against measles as a slow flow of relief supplies to mountainous areas has raised fears of an outbreak of the disease.

The UN says the quake has affected more than a quarter of Nepal’s 28 million people.