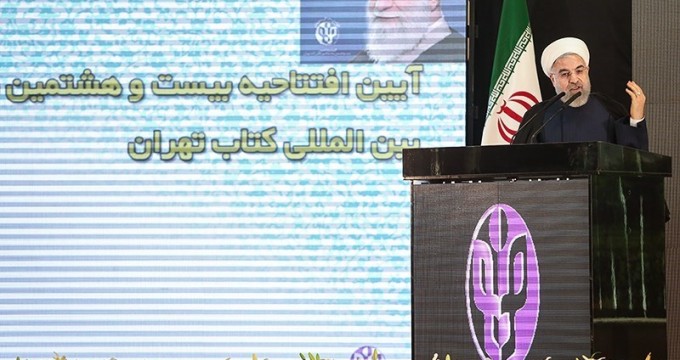 Addressing the opening ceremony of the 28th Tehran International Book Fair (TIBF), Rouhani regretted that some countries pave the grounds for selling their weapons in a bid to achieve economic growth in their countries.

“Should the world industry thrive in this way? Should the slaughter of people in Baghdad, Damascus, and Sana’a be the price for the employment and activity of weapons manufacturing factories?” the Iranian president asked.

He went on to say that the Middle East is now faced with the destruction of civilizations that had been created centuries ago, and criticized some countries for their indifference to such regional problems.

He also criticized certain moves to stir rift among different ethnicities in the region, and said all people in the Middle East, from Shiites to Sunnis and from Christians to Jews and Muslims, have long lived and interacted with each other without any conflict.

Rouhani’s remarks came as the Middle East region is plunging deeper into an arms race, with an estimated $18bln expected to be spent on weapons this year, a development that experts warn is fuelling serious tension and conflict in the region.

Arms sales to the top five purchasers in the region – Saudi Arabia, the United Arab Emirates, Algeria, Egypt and Iraq – surge this year to more than $18bln, up from $12bln last year. Among the systems being purchased are jet fighters, missiles, armored vehicles, drones and helicopters.

The scale of the arms race was revealed this year in reports published by IHS Jane’s Global Defense Trade Report and the Stockholm International Peace Research Institute (Sipri). They showed how Saudi Arabia had become the world’s largest importer of weapons and fourth largest military spender and that other Middle East states were sharply increasing their arms purchases.