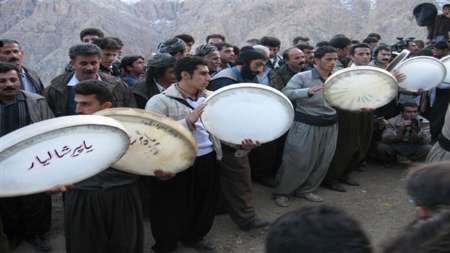 The ceremony has been held in Hawraman Takht in the western Iranian province of Kurdestan for thousands of years, Tehran-based English newspaper Iran Daily reported.

Men gather to chip at a huge white stone near a place associated with an esteemed sage Pir Shalyar.

The locals believe the stone again grows over the year and returns to its original shape.

Many people take part in the ceremony from far and wide, and take a piece of the stone as a blessed object.

Speaking on the sidelines of the event on May 1, Arman Vatandoost, the deputy head of Kurdestan Cultural Heritage, Handicrafts and Tourism Department, said the registration of Hawraman on UNESCO’s World Heritage List is a priority.

Vatandoost added that Hawraman has all the criteria specified by UNESCO for global registration.

“Some 10,000 people take part in the Komsay ceremony that is held in a symbolic way,” he said.

Bashir Qasemi, one of the members of Hawraman Islamic City Council, said Komsay is a symbol of culture and history of Hawraman’s people.

He added that elders gather to plan for the ceremony early May.

“During the gathering, the mamosta, headman and shepherd of every village are selected,” he said.

Moqaddasi noted that Pir Shalyar used to live during the time of Sheikh Muhiyeddin Abdul Qadir Gilani who said, ‘My brother Mostafa, renowned as Pir Shalyar, is a perfect man.’

‘Pir Shalyar in Hawraman culture is a symbol of ancient beliefs. It has been a guide for the people of this region,’ he said.

“Since Hawraman is surrounded by high mountain peaks, its culture and language have been preserved.”

Hawraman, which in the Kurdish language means the land of sun, is a mountainous region in western Iran.

One of the outstanding features of this region is its rocky and mountainous landscape, which include historical villages, castles and religious sites, with different customs and rituals.