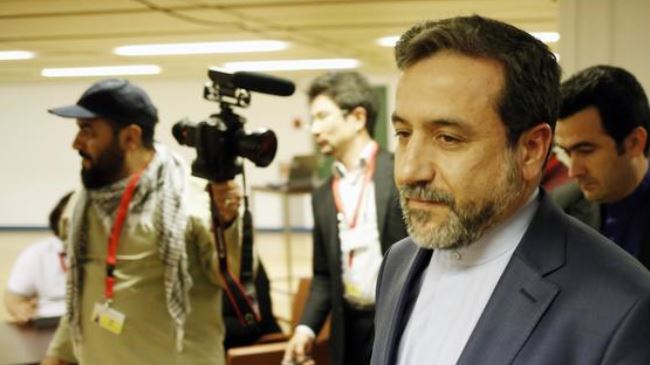 As nuclear talks end in New York and prepare to move to Europe, Iran has pressed the issue of the removal of UN, European Union, and US sanctions.

Iran’s lead negotiator, Deputy Foreign Minister Abbas Araqchi (pictured), said that “all economic and political sanctions against Iran have to be lifted” on the day that Tehran and the 5+1 Powers (US, Britain, France, Russia, Germany, and China) reach a comprehensive agreement.

Iran and the US have fenced over the issue since a nuclear framework was announced on April 2, with a view to a resolution by a June 30 deadline. Iranian officials have called for the immediate, full removal of the sanctions. The US says lifting or suspension is linked to International Atomic Energy Agency verification of Iranian compliance with the terms of the agreement.

Both sides have signaled at least a small measure of flexibility in the last 10 days. President Obama has said that most sanctions can be removed on the day of signature, provided they can be re-imposed if Iran violates the deal. Iranian Foreign Minister Mohammad Javad Zarif has said that termination of sanctions is linked to verification, while declaring this can be accomplished “within a few days”.

Araqchi played down differences over another headline issue, the inspection of Iran’s nuclear facilities. Commenting on a remark by US Secretary of State John Kerry that the inspections will be long-term, he said this was “not odd”, as they were part of the regulations of the Nuclear Non-Proliferation Treaty.

Araqchi’s comments play down the recent tough remarks of Iranian officials ruling out unrestricted access to Tehran’s military sites. Those remarks are more for public consumption than a reflection of the talks: the 5+1 Powers’ focus is on inspection of nuclear facilities and uranium enrichment plants, while the guidelines for access to military sites are being left to discussions between the International Atomic Energy Agency and the Islamic Republic.

Since last Thursday, the Iranian delegation and the European Union’s deputy foreign policy head, Helga Schmid, have spent dozens of hours drafting the text of a final agreement. While expressing optimism, Araqchi and Zarif have both cautioned that the text will have gaps when it is presented to an Iran-5+1 meeting.

The discussions adjourn today, although experts from the two sides will stay in New York until Thursday. The negotiations will resume in Vienna next week.