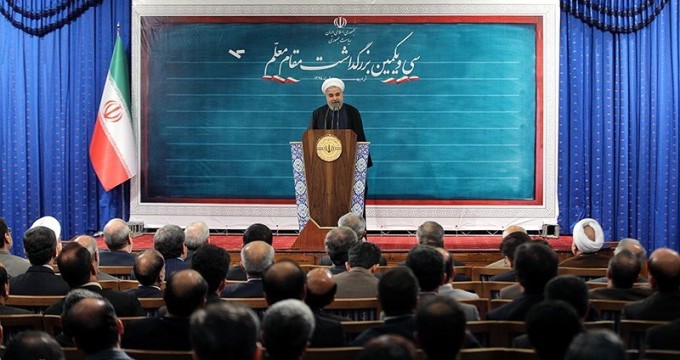 TEHRAN (FNA)- Iranian President Hassan Rouhani lashed out at the western powers for their attempts to monopolize science and technology.

“The West is seeking to monopolize science and the problem with the West is that when it develops a body of knowledge, it seeks to monopolize it to build scientific and economic hegemony and even more than that, political hegemony” over other nations, Rouhani said, addressing a ceremony to commemorate the ‘Teachers Day’ in Iran on Monday.

Meantime, he said, Muslims aren’t like the westerners and provide everybody with the science and knowledge that they have earned without turning it into a pressure leverage.

In relevant remarks in February, Rouhani called on the Non-Aligned Movement (NAM) member states to coordinate efforts to break the monopoly of certain western powers in scientific and technological domains.

Addressing the opening of the meeting of Science Ministers of the NAM member states, President Rouhani said that discrimination in science is now used as a tool to keep up the process of underdevelopment, poverty and unemployment in non-developed countries.

The Iranian president underscored the need for independent countries to adopt collective policies to confront this trend.

He urged the NAM member states to drop non-realistic missions and try to focus on possible areas of joint scientific and technological cooperation.

President Rouhani added that every NAM country enjoyed remarkable scientific capacities which could be shared with other member states.

President Rouhani also said that scientific and technological cooperation within the NAM could enhance progress and prosperity in member states and in the long run help attain the ultimate goal of the organization which is to establish peace and equality in the world.

As learning and teaching knowledge have no borders, he said, the benefits gained from them have no limits either.