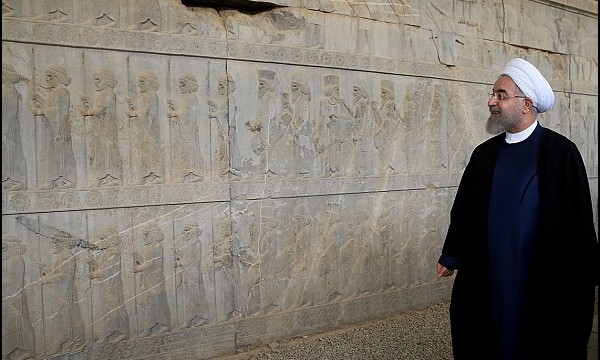 Shiraz, Fars Prov, April 30, IRNA – Iranian President Hassan Rouhani said on Thursday that the message the ancient Palace of Persepolis (Takht-e Jamshid) is sending to the world is that ‘We are capable.’

The President made the remark when he was visiting the historical site of Persepolis in this southern province.

This historical place sends out the message that this is a great nation which is capable of accomplishing everything successfully, he said.

This ancient place is a proof that ‘science, technology and art’ has been present in this country for thousands of years now, said the President.

A nation that was able to design and build such a great place as this using supreme technology several thousands of years ago could easily overcome all problems today as well, he said.

Saying that the nation today was proud of its Iranian nationality interwoven with the Islamic culture, President Rouhani noted that the identity of the country today should be an ‘Islamic-Iranian’ one.

Stressing that such sites as Takht-e Jamshid are regarded as cases which could attract good numbers of tourists, he underlined that his government is meeting its duty of preserving such ancient places around the country by allocating enough money to that end.

In the second day of his stay in this southern country province, President Rouhani visited the Takht-e Jamshid, the ancient palace dating back to the Achaemenid Empire.

The history of Persepolis, literally meaning ‘city of Persians’ goes back to 515 BCE. Now situated 60 kms north of the provincial capital of Shiraz, it serves as the ceremonial capital of the Achaemenid Empire.

The President and his some of his cabinet members arrived here on Wednesday for tour of province.

The visit takes place at the 16th leg of his provincial tours.