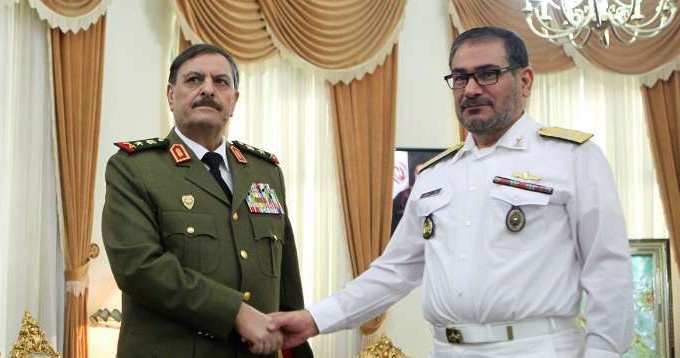 “Saudi Arabia is entangled in problems and a power struggle in the government’s structure,” Ali Shamkhani said in a meeting with Syrian Defense Minister Fahd Jassem al-Freij in the Iranian capital, Tehran, on Wednesday.

Saudi Arabia “has lost its place in the Islamic world by attacking the weakest neighbors and massacring innocent Muslim Yemeni citizens,” Shamkhani added.

He further referred to other countries’ refusal to get involved in the Saudi aggression against its neighboring country, saying, “Other countries are not willing to be an accomplice to the crimes [committed] by this country [Saudi Arabia].”

“The international community has reached the conclusion that triggering violence and using terrorism as an instrument only aggravate the crisis,” Shamkhani stressed, adding there is no solution to the crisis, but diplomacy and dialog.

Yemenis gather in the yard of the residence of Ansarullah military commander, Abdullah Yahya al-Hakim, after a Saudi airstrike destroyed his property in the Yemeni capital, Sana’a, on April 28, 2015. © AFP

Saudi Arabia launched its air campaign against Yemen on March 26 – without a United Nations mandate – in a bid to undermine the revolutionary forces backed by Houthi Ansarullah movement and to restore power to the country’s fugitive former president, Abd Rabbuh Mansur Hadi, a staunch ally of Riyadh.

The air campaign started amid the gains by Yemeni popular committees against al-Qaeda.

On April 21, Riyadh announced the end of the first phase of its military operation, which has left over 1,000 people dead so far, but airstrikes have continued with Saudi bombers targeting different areas across the country in a new phase. More than 4,000 people have also been injured in the aggression.

The senior Iran official also lauded the Syrian nation and government’s resistance against terrorism, saying the countries that support terrorists operating in the country aim to provide security for Israel.

“The countries of the resistance front will strongly support Syria,” he added.

A Syrian man stands on top of rubble following a rocket attack on Bab al-Hadid neighborhood of the northern Syrian city of Aleppo, January 2, 2015. (AFP)