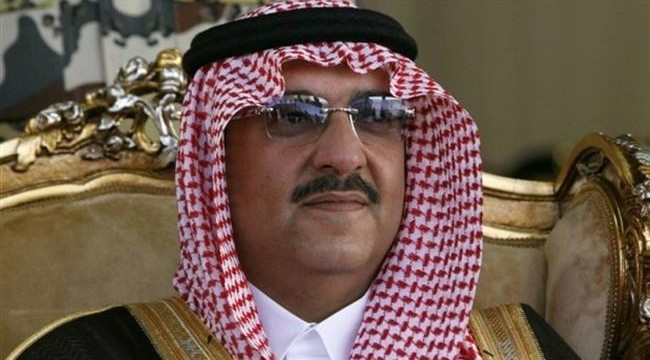 RIYADH, Saudi Arabia (AP) — Saudi Arabia’s King Salman on Wednesday removed his half-brother from the post of crown prince and named his nephew, the country’s Interior Minister, in his place.

The royal decree also announced that the king’s son, Prince Mohammed bin Salman, has been appointed deputy crown prince. He is believed to be around 30 years old and is also the country’s defense minister. As deputy crown prince, the prince is essentially seen as being second in line to the throne.

The new appointments further thrust a new generation of Saudi princes into the line of succession.

Prince Muqrin, who was crown prince until Wednesday’s reshuffle, is the youngest son of the founder of Saudi Arabia, the late King Abdul-Aziz Al Saud. At 69 years old, he once headed the kingdom’s intelligence agency, but was largely seen as a transitional figure in his post as crown prince.

Power has passed among Abdul-Aziz’s sons, from brother to brother, since his death in 1953. The crown prince and deputy crown prince are both from among a generation of grandsons of Abdul-Aziz.

The late King Abdullah had named Muqrin as crown prince in a move approved at the time by the Allegiance Council, a body made up of the living sons of Abdul-Aziz and some of the prominent grandsons who vote to pick the king and crown prince from among them.

The Allegiance Council, whose work was formalized under Abdullah before his passing in January, was likely consulted about the current reshuffle.