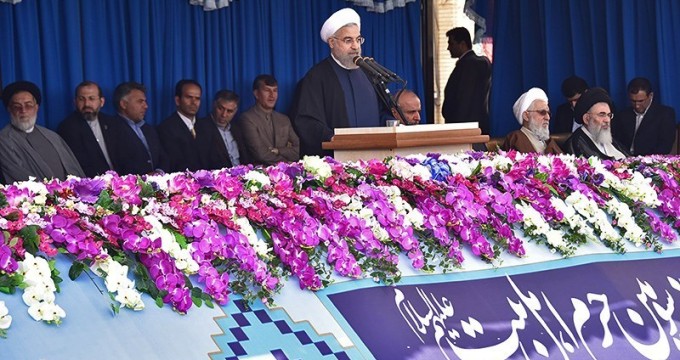 Iran’s coverage: All UNSC illegitimate sanctions to be lifted: Rouhani

‘Unjust’ UNSC resolutions against Iran to be terminated soon: President

Iranian President Hassan Rouhani blasted all sanctions imposed by certain Western countries against Tehran, including the United Nations Security Council anti-Iran resolutions, as “unjust”, saying that the sanctions regime will come to an end in the near future.

The European Union’s top diplomat on Tuesday voiced the hope that Iran would play an important but constructive role in a renewed United Nations push to restart negotiations aimed at ending the four-year civil war in Syria.

Zarif: Iran seeking talks with West based on mutual respect

Iranian Foreign Minister Mohammad Javad Zarif reiterated that Iran is after talks with the West based on mutual respect.

Iran has condemned as “totally inhumane and spiteful” a recent move by Saudi warplanes to block an Iranian plane carrying medical stuff for crisis-hit Yemen.

Iran’s presidential aide: Removal of all sanctions indispensable part of any final N. deal with powers

Iranian President’s Chief of Staff Mohammad Nahavandian underlined that termination of all sanctions should definitely be a part of any comprehensive agreement with the world powers.

The 34th flotilla of the Iranian Navy is set to arrive in Red Sea in near future, a senior navy official said on Wednesday.

The U.S. Senate rejected an effort on Tuesday to require any nuclear agreement with Iran to be considered an international treaty, which would have forced any deal to be ratified by two-thirds of the Senate’s 100 members.

Iran calls for coop. with Austria on nuclear disarmament

Iran’s Zarif stressing the significance of nuclear disarmament to member states of NAM, called for closer cooperation on this issue with the Austria.