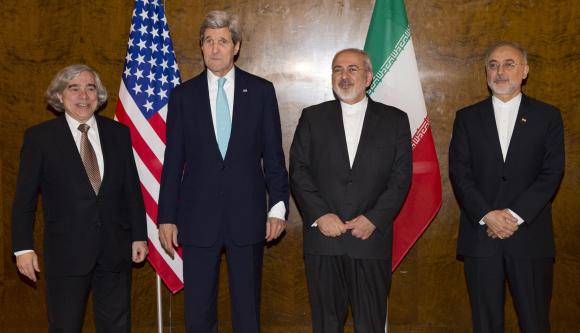 Without fanfare or hoopla, the NPT has succeeded in making the world a safer place. And now Tehran is back in the fold.

Earlier this month, the United States and our P5+1 partners in coordination with the European Union reached a historic framework for a comprehensive deal with Iran that will ensure its nuclear program is exclusively peaceful going forward. Of course, nothing is agreed until everything is agreed. Important issues still need to be resolved in the coming weeks ahead of the June 30 final deadline. But the parameters we have announced underscore the commitment of the international community to stopping the spread of nuclear weapons.

Amid the drama and promise of the negotiations, it is vital to remember that the basic goal was — and remains — preventing Iran from obtaining a nuclear weapon by bringing Iran back into compliance with its obligations under the Nuclear Non-Proliferation Treaty (NPT).

The NPT is at the heart of the global effort to prevent the spread of nuclear weapons, and it has helped keep the world safe for 45 years. We welcome the international community to today’s opening of the 2015 NPT Review Conference at the United Nations in New York and encourage them as they work toward recommendations on how to strengthen this landmark accord.

Nearly every country in the world has joined the NPT. The treaty is the irreplaceable foundation for international efforts to achieve the peace and security of a world without nuclear weapons, a goal repeatedly affirmed by President Barack Obama as part of his ambitious Prague agenda.

The NPT opened the door to reducing the world’s stockpiles of nuclear weapons — and reducing the threat of nuclear war. Since the United States signed the NPT in 1968, we have cut our nuclear arsenal by almost 85 percent. Through 20-plus years of cooperation with Russia, together we turned the equivalent of 20,000 Soviet nuclear warheads into energy that is lighting homes and offices across America.

The barriers to proliferation are strong and growing stronger. The International Atomic Energy Agency (IAEA) plays an essential role in verifying that nuclear energy programs remain peaceful. The organization will be critical to verifying Iran’s compliance under any final understanding and monitoring the means adopted to prevent Iran from acquiring or misusing technologies and materials that could be used to secretly to build a bomb.

Because of the NPT, peaceful uses of the atom are helping to solve the crises of the day, from climate change to sustainable development. The IAEA Technical Cooperation Program and its “Peaceful Uses Initiative” are helping to bring clean water, provide world-class cancer treatment and Ebola diagnosis, and ensure food security around the world.

The United States has been at the forefront of all these efforts. Our commitment and contributions to these goals are second to none.

We still have a lot of work to do, and we know it. The United States and Russia still possess over 90 percent of the world’s nuclear weapons. Our efforts through the 2010 New Strategic Arms Reduction Treaty (New START) with Russia have put both countries on track to reduce nuclear stockpiles to the lowest levels in 60 years. President Obama has made clear our willingness to pursue negotiations to reduce deployed strategic nuclear weapons below the level set by New START. He has also proposed negotiated, verifiable reductions in non-strategic nuclear weapons and in non-deployed nuclear weapon stockpiles. This offer remains on the table and we urge Moscow to be a willing partner.

The United States knows that future nuclear reductions will require enhanced verification methods and that all nations share the responsibility to identify and develop them. We recently started the International Partnership for Nuclear Disarmament Verification, which will bring countries together to develop the best techniques and tools for monitoring nuclear stockpiles at lower numbers.

As the heads of two of the U.S. departments responsible for America’s nuclear policies, we are proud that no other nation has devoted as much time and resources to preventing the spread of nuclear weapons. As President Obama said in Prague in 2009, we cannot do these things alone, but we can and must lead.

As we work to fulfill our NPT commitments, the United States will do everything in its power to ensure that nuclear weapons are never used again. We have already taken the vital step to clarify that the fundamental role of nuclear weapons in our security strategy is to deter nuclear attack on the United States and its allies and partners. Our nuclear forces remain in a reduced alert status, and we continue to take every reasonable step to ensure the safety, security, and strict control of our arsenal.

Through word and deed, the United States is fighting nuclear dangers across the board, but there is still much to do. Reducing and eventually eliminating the nuclear threat will never be easy, but the NPT is our best tool in this fight. The accord represents a heroic, if quiet, triumph of pragmatic cooperation to protect the world from nuclear dangers while promoting the safe, peaceful uses of the atom that can benefit mankind.