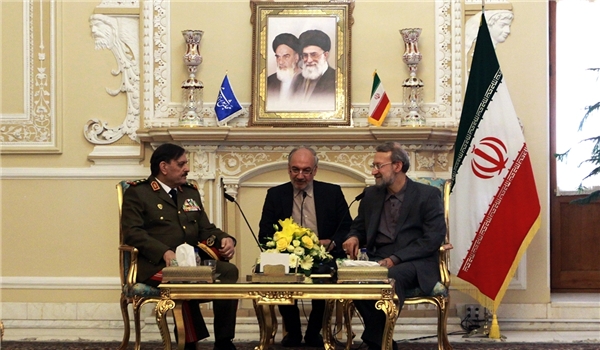 “We have plans on our agenda to intensify the fight against terrorists,” Lieutenant General al-Freij said in a meeting with Iranian Parliament Speaker Ali Larijani in Tehran on Wednesday.

He underlined that the Syrian government has made good achievements in confronting terrorists in different parts of Syria, ad said, “The terrorists’ onslaught on Syria is a US-Zionist plot which has taken place with the extensive support of some regional countries and we see that the wounded ISIL and Al-Nusra Front terrorists receive medical treatment in the Zionist regime’s hospitals.”

The Iranian parliament speaker, for his part, said that Syria is in the frontline of resistance against “the Zionist regime” in the region.

Larijani pointed to the status quo of Iran-Syria relations, and said, “The people of the two countries have come closer to each other due to their abundant interests and commonalities; the two countries’ relations in different areas have always been constructive, friendly and brotherly.”

“International community should prevent logistic support for Takfiri terrorists (in Syria) in order to stop violence in the war-torn region,” Amir Abdollahian said in the third International Humanitarian Pledging Conference for Syria in Kuwait.

“If Syria’s borders are sealed against any infiltration by the terrorists, and if the neighboring countries carry out their role in controlling terrorist activities, and if training and arming of the country’s antigovernment rebels are halted, then terrorism in the war-torn country will be ultimately eradicated,” the Iranian official stressed.

He further stressed that Iran supports reform in Syria and in the meantime rejects foreign interference in the country.

The Iranian official went on to say that terrorism has unfortunately been manipulated as a tool by certain countries to realize their goals, but it resulted in destabilization of the region and caused bigger problems for advocates of terrorists.

The violence fuelled by Takfiri groups has so far claimed the lives of over 210,000 people, according to reports. New figures show that over 76,000 people, including thousands of children, lost their lives in Syria last year.

The Takfiri terrorist group, with members from several western countries, controls swathes of land in Syria and Iraq, and has been carrying out horrific acts of violence such as public decapitations and crucifixions against all communities such as Shiites, Sunnis, Kurds and Christians.