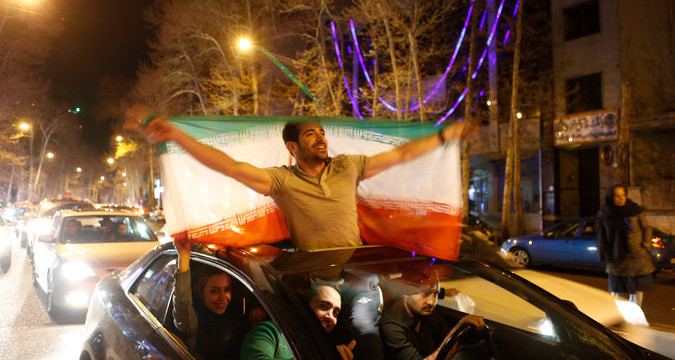 The Iran deal that never was

There was a presidential statement in the Rose Garden of the White House. There were joyous celebrations on the streets of Tehran. There were lamentations in the US Senate. All these events were provoked by the news, earlier this month, of a framework nuclear deal between Iran and the US. Three weeks later, the newspapers are still full of critiques of the agreement.

But all of this fuss disguises an awkward fact. There is no Iran nuclear deal.

The joint statement released by Iran and its negotiating partners, earlier this month, was a few short paragraphs, skirting all the crucial issues. All the detail about what was “agreed” was actually contained in a unilateral statement issued by the Americans on April 2nd – the so-called White House fact sheet. Iran had not signed off on that “fact sheet”. And, in subsequent days, Iran made it clear that it dissents from the American interpretation of what was agreed. Ayatollah Ali Khamenei, Iran’s supreme leader, has tweeted that the US fact sheet was “wrong on most of the issues”.

The disagreements between Iran and America on what was agreed in the Geneva negotiations are – as Mr Khamenei suggests – wide-ranging. They cover everything from the inspections regime, to the precise fate of the reactor at Arak. But perhaps the starkest disagreement is over when sanctions on Iran would be lifted. Ayatollah Khamenei says that all sanctions will have to be lifted on the very day that agreement is reached. The Americans insist that sanctions can only be lifted in phases, as Iran puts in place restrictions on its nuclear programme.

The two sides are meant to bridge all these gaps between now and their next deadline of June 30, which is when a final agreement is meant to be agreed. However, given that the framework agreement reached this month is actually a mirage, it seems rather unlikely that the two sides will sign off on the final deal in June – or even later this year.

The story of how we got to this delicate and confused stage says a lot about the extreme difficulty of reaching a final agreement. The issuing of the “White House fact sheet” was a calculated gamble by the Americans, who were frustrated by the agonisingly slow negotiations in Geneva. Dismayed by the lack of a detailed agreed text, senior US officials drew up their own memorandum – setting out the various concessions that they believed the Iranians had made over many months of discussions. By releasing the “fact sheet” unilaterally, the US was effectively daring the Iranians to walk away from the negotiating table. The Americans felt that the celebrations in Iran – in response to the announcement of the “deal” – vindicated their gamble. Their calculation is still that Iran’s leaders – having raised domestic expectations that Iran’s international isolation will soon end – will now find it very difficult to dash their people’s hopes, based on some minor-sounding details about the numbers of centrifuges allowed at Natanz, or the phasing of sanctions relief.

That calculation could still work. But the increasingly open dissent from within Iran suggests that it could just as easily unravel, as the two sides re-engage in detailed negotiations.

As well as the Congressional and Israeli hurdles, the US is also facing is also facing dissent from the Gulf Arabs and even some of their European negotiating partners.

The Gulf states, led by Saudi Arabia, are deeply wary of the deal. As Sunni Arabs, they worry that the Persians of Shia Iran are already expanding their influence across the region. They complain of Iran’s hold on “four capitals” in the Arab world – Damascus, Beirut, Baghdad and Sanna (in Yemen). The Saudis worry that the lifting of sanctions would give their Iranian rivals a big economic and financial boost – allowing them to further expand their influence

Even within the negotiating group led by the Americans – the so-called P5+1 – there is some uneasiness about the outlines laid out by the White House. A particular issue of concern is whether nuclear inspectors would be allowed into Iran’s military research sites – a point that remains vague, but vital.

Given all these doubts and uncertainties, it is tempting to wonder what all the fuss is about. Talk of an Iran “deal” is certainly unjustified. We are a long way from that. Given the gaps between Iran and the US, failure is still more likely than success.

And yet the release of the cheekily-named US “fact sheet” was still a justified gamble. It has put momentum into negotiations that were in danger of grinding to a halt. And it has raised the prospect that at least one dangerous dispute in the Middle East can be settled by negotiation and discussion – rather than by violence. The support for that idea amongst ordinary American and Iranians is evident. That popular pressure remains the best hope that the nuclear negotiators may yet come up with a genuine agreement.

This Article was written by Gideon Rachman. Gideon became chief foreign affairs columnist for the Financial Times in July 2006. He joined the FT after a 15-year career at The Economist, which included spells as a foreign correspondent in Brussels, Washington and Bangkok.