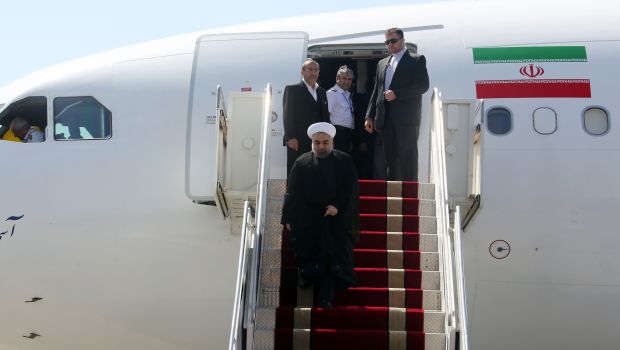 Tehran, April 24, IRNA – President Hassan Rouhani said in Tehran on Friday that the South-South and Asia-Africa cooperation is of high importance at present conditions worldwide as it will thwart unilateralism.

‘The South-South and Asia-Africa cooperation is a very important and great move globally,’ said President Rouhani in an interview with reporters upon return home at Tehran International Airport.

President Rouhani elaborated on his Indonesia trip to attend the Asian-African Summit in Jakarta and said present century is called the Century of Asia, a continent growing and developing further and further, as is the case in Africa.

Providing an outline of the Jakarta Summit, President Rouhani said the meeting, held on the occasion of the 60th anniversary of Bandung session, got senior leaders of more than 100 countries together to discuss various subjects, including ways of expansion of economic cooperation between the Asian and African continents’ leaders.

The president said considering ongoing regional and global conditions, terrorism campaign overshadowed almost all subjects and the participants discussed condition of countries , such as Syria and Africa, facing the issue and the intricacies of the Yemeni people.

In his meetings on the sidelines of the two-day Summit, the president said he had met and conferred with the Chinese, Vietnamese, and Indonesian counterparts as well as prime ministers of Japan and Bangladesh and all of them urged expansion of relations with Iran.

He said all the senior leaders had congratulated him on Iranian nation’s resistance and said the nation is taking the final steps in the path to talks with the G5+1.

President Hassan Rouhani, heading a high-ranking delegation, wound up his visit to Indonesia and arrived in Tehran early in the Friday morning.

In the Summit, the President gave an address and met and conferred with the heads of state and high-ranking officials of the attending countries, including Japan, China, Indonesia, Vietnam and Bangladesh, on the sidelines.

He also met a group of elite and academics of Indonesian universities, discussing unity in the world of Islam.

More than 100 countries from across the Asian and African continents gathered in the Indonesian capital to forge deeper ties at the Asian-African Summit.

The two-day leaders’ summit — part of a five-day conference — is held once every 10 years.

The Asia-Africa Summit began in 1955 in Indonesia’s Bandung, as countries from the two continents united against colonialism.

Trade between the two continents has grown from $2.8 billion in 1990 to $270 billion by 2012. Its current members account for 75 percent of the world’s population and 28 percent of global GDP.

There are high hopes for the future of the summit as a key forum for exchanging views on regional and global challenges.