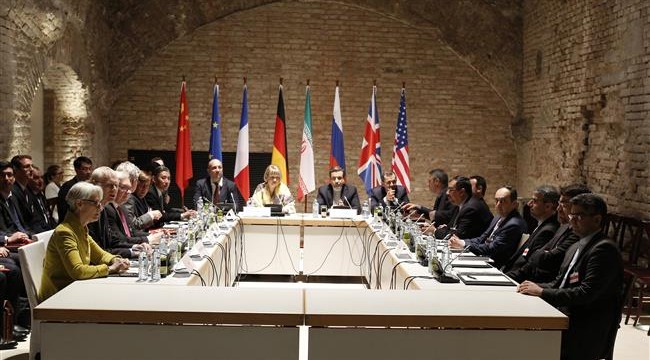 A senior Iranian nuclear negotiator says Iran and the P5+1 group have started drafting the text of mechanisms related to the removal of sanctions imposed on Tehran over its peaceful nuclear program.

Speaking to Press TV following meetings with representatives of the P5+1 group in the Austrian capital city of Vienna on Friday, Iran’s Deputy Foreign Minister for Legal and International Affairs Abbas Araqchi said that the US negotiating delegation gave the Iranian nuclear team “very useful” explanations about the issue.

Noting that drafting has begun on the issue of sanctions, Araqchi said the US team “gave us explanations [about removal of sanctions] which were very useful.”

The Iranian deputy foreign minister said the negotiating sides have made steady, but slow progress, adding, “We are working on a dispute settlement mechanism for possibility of violations.”

Representatives of Iran and the P5+1 group held intense talks in the Austrian capital in the third day of their latest round of negotiations over the Islamic Republic’s nuclear program.

The talks in Vienna are aimed at drafting the text of the Joint Comprehensive Plan of Action (JCPOA) according to the parameters set through a mutual understanding reached in the Swiss city of Lausanne on April 2.

In the morning, Iran’s deputy foreign ministers Abbas Araqchi and Majid Takht-e Ravanchi met with their Russian and Chinese counterparts.

At the same time, experts from negotiating parties held a concurrent meeting. The expert meeting was focused on the mechanism for removal of anti-Iran sanction.

Later in the afternoon, Iranian deputy foreign ministers sat for negotiations with representatives of three European countries, France, Germany and the UK followed by another meeting with the US Under-Secretary of State for Political Affairs Wendy Sherman and EU political director, Helga Schmid.

The new round of the talks between representatives of Iran and the P5+1 – the United States, Russia, China, France, Britain, and Germany – lasted three days with the aim of drafting a nuclear accord.