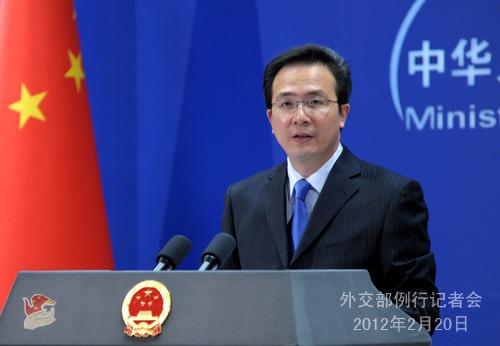 China hopes Iran, P5+1 will keep up good work in their talks

China hopes that all parties in the Iran-P5+1 talks will keep up the good work after they have achieved consensus on the ‘key elements’ of a comprehensive agreement.

Speaking to reporters, Hong Lei said Beijing also hopes the two sides will accommodate each other’s concerns, completely resolve the outstanding issues at an early date and accumulate more favorable conditions for the conclusion of a comprehensive agreement on time.

After the first round of nuclear talks followed by initial accord, Deputy Foreign Minister for Legal and International Affairs Abbas Araqchi, who led the Iranian delegation, and the EU political director Helga Schmid held talks in Vienna on Thursday.

Araqchi also met and conferred with the US Under Secretary for Political Affairs Wendy Sherman, who headed the US team, on the second day of talks on Iran peaceful nuclear program.

The negotiations on Thursday came on the heels of two rounds of intensive talks by the two sides a day ago.

Hamid Baeidinejad, director general for political affairs at the Iranian Foreign Ministry, as well as Iranian Deputy Foreign Minister for European and American Affairs Majid Takht-e Ravanchi and other experts were also present in the talks.

Araqchi said on Wednesday that the issue of anti-Iran sanctions was one of the key topics on the agenda in that round of talks.