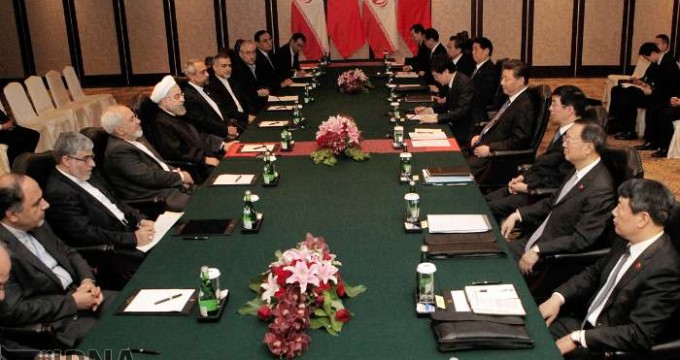 Jakarta, April 23, IRNA – President Hassan Rouhani said he discussed the ways Beijing could help the nuclear talks between Iran and the 5+1 with his Chinese counterpart Xi Jinping

He made the remarks here on Thursday while talking to reporters after a meeting with Xi on the sideline of the 60th Asia-Africa Summit Meeting.

He said he focused on how Beijing could help the process of nuclear talks between Iran and the six world powers.

President Rouhani, who is in the Indonesian capital to attend a summit meeting of Asian-African heads of state,

The president said that the two presidents had also discussed ways to fight terrorism and extremism and explored ways to promote economic and cultural relations.

Rouhani also said that the two have discussed the latest regional developments, including the ongoing crisis in Yemen.

In his meeting with the Indonesian president, Rouhani said that he and his Indonesian counterpart have agreed to give a boost to bilateral relations.

The president also touched upon his meeting with Vietnamese counterpart and said that they had discussed expansion of bilateral relations.

He said that they underlined the need for cooperation between Tehran and Hanoi in international organizations including Economic Cooperation Organization (ECO) and the Association of Southeast Asian Nations (ASEAN).