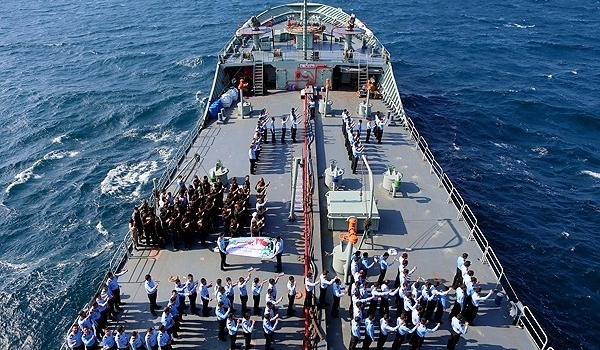 TEHRAN (FNA)- The Iranian Navy’s 34th flotilla of warships arrived in the Gulf of Aden on Wednesday.

The Navy’s 34th Fleet, comprising Alborz destroyer and Bushehr helicopter-carrier warship, will conduct anti-piracy patrols in the high seas and Gulf of Aden and will protect the country’s cargo ships and oil tankers against pirates.

The mission of the 34th fleet in the Gulf of Aden and the Red Sea will last around three months.

The flotilla had left Bandar Abbas port, in Southern Hormozgan province, for the Gulf of Aden on April 8.

The Iranian Navy’s 33rd fleet of warships dispatched to the high seas returned to Iran on April 7 after a 77-day mission.

The Iranian 34th flotilla of warships was deployed in the Gulf of Aden following some recent Arab media allegations that Egyptian warships had shooed away an Iranian fleet in the international waterway.

In reaction to such reports, Iranian Navy Commander Rear Admiral Habibollah Sayyari said no country dared to issue warning to Iranian warships in the Gulf of Aden, underlining Iran’s firm decision to continue presence in the Gulf.

“This presence (of the Iranian flotilla of warships) continues in the free waters, including the Gulf of Aden, to fight against piracy according to the plan which was drawn at the request of the International Maritime Organization and no one can warn the Iranian warships (to move away) and this has not happened yet,” Sayyari told reporters on the sidelines of military parades held in Tehran last Saturday morning to mark the Army Day.

Asked about the possibility of the Iranian warships’ deployment near Yemen, he said, “There is no need for our flotilla of warships to dock in Yemen, but we are present in the Gulf of Aden powerfully and at present, our 34th fleet has been sent to the region.”

“We don’t have such a plan (for leaving the waterway) and we hope that security will be established in the Gulf of Aden with the help of all countries.”

Sayyari also dismissed news reports claiming that Iranian warships have received warnings by Saudi Arabia, and said, “No threat has been made against us; we also don’t allow others to threaten or warn us since we can be present in the free and international waters based on the international laws. We haven’t entered the territorial waters of any country without permission.”