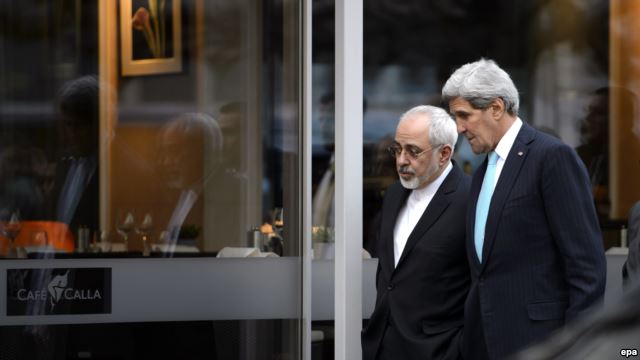 Iran nuclear deal: Can US be trusted?

“The Islamic Republic of Iran has never been and will never be a threat to the [Middle East] region and neighboring countries, but it will react with full strength against any aggression.”

Iran has not acted aggressively against its neighbors since Nader Shah invaded India in 1738. Yet US politicians, military leaders and the media persist in portraying Iran as an untrustworthy menace threatening the entire civilized world.

Given that the US military now appears to have a Zionist in charge as its new defense secretary and the relentless threatening rhetoric, we must ask, if a final nuclear deal with Iran is sealed, can the US be trusted to abide by its provisions? Iran’s Leader Ayatollah Seyyed Ali Khamenei has justifiable reservations.

In a speech on April 19, 2015 before a group of Iran’s high-level military commanders, Ayatollah Khamenei correctly observed, “Today, the biggest threats to the world and to the region are the US and the Zionist regime, which intervene in any spot they deem necessary and trigger killings, without any consideration and without conforming to religious and conscientious obligations and criteria.” The veracity of the Leader’s words are demonstrated by the US support for the despotic Saudi regime’s bombing campaign against Yemen, which has targeted refugee camps, hospitals, schools, urban neighborhoods and soccer stadiums, resulting in the slaughter of hundreds of innocent people. Similarly, the Israeli entity supports its newfound Saudi ally in its latest aggression in Yemen. Of course, the occupant of the Oval Office whose middle name is Hussein has assured the Custodian of the Two Holy Mosques of “US full commitment to sustain Saudi Arabia’s capabilities to defend itself,” in the same way that as he has reaffirmed “Israel’s right to defend itself” while the Zionist regime was systematically slaughtering innocent, unarmed civilians in Gaza with US-supplied weapons. How could the Leader of Iran trust a nation whose president had stood in Zionist leader Netanyahu’s residence in occupied Al-Quds just a year earlier and blatantly threatening the Islamic Republic avowed, “All options are on the table. We will do what is necessary to prevent Iran from getting the world’s worst weapons.”

The incessant barrage of US threats against Iran appears to be the byproduct of a thorough Israeli penetration into the highest levels of the American government, resulting in a convergence of neocon Iranophobic dogma and Zionist security paranoia. That Congress is an “Israeli-occupied territory” has been known for years, but now Tel Aviv’s tentacles extend to the US military. For verification, one need look no further than Obama’s new war chief, Ashton Carter, who during a 2013 visit to the Israeli entity remarked, “Protecting America means protecting Israel, and that’s why we’re here in the first place.” According to the Zionist organization United with Israel, Carter “is regarded by Israel as an honest and perceptive friend in the uppermost echelons of the Pentagon.”

Apparently, Carter not only believes that Iran has a nuclear weapons program, but also appears intent on conflating the two remaining independent members of George W. Bush’s infamous Axis of Evil. “With respect to the nuclear weapons situation in Iran … those negotiations that are being conducted by us and our P5-plus-1 partners with the Iranians have the objective of arresting the North Korean — I mean, not North Korean, excuse me, the Iranian nuclear program,” averred the US defense secretary during a recent Pentagon press conference. Perhaps the mistake reflects Carter’s long standing desire to bomb North Korea’s nuclear facilities, which in 2006 he viewed as “a prudent policy.”

While the slip of the tongue is somewhat amusing, Carter’s obsession with security is alarming but in perfect alignment with Zionist interests. In a 1998 paper coauthored with John Deutch and Philip Zelikow, Carter expounded his thesis that nations should be “obliged to reassure other states that are worried and to take reasonable measures to prove they are not secretly developing weapons of mass destruction. Failure to supply such proof or to prosecute the criminals living within their borders should entitle worried nations to take all necessary actions for their self-defense.” Hence Carter’s philosophy meshes perfectly with Netanyahu’s ceaseless cacophony of concerns over an imagined “Iranian nuclear threat.” Furthermore, any nuclear agreement with Iran would represent a concrete implementation of Carter’s view that the burden of proof of compliance rests on the suspect nation. From this it follows rather quickly that suspicion alone is sufficient to justify military threats. Of course that Carter would not apply his burden of proof on the suspect nation doctrine to the Israeli entity goes without saying.

During the same meeting with military commanders, Ayatollah Khamenei stated, “After a [short] period of silence by the opposite side, one of their officials recently spoke once more of options on the table.” The Leader was referring to US joint chiefs of staff chairman Martin Dempsey, who, in a press conference emphasized, “The military option that I owe the president to both encourage the diplomatic solution and, if the diplomacy fails, to ensure that Iran doesn’t achieve a nuclear weapon, is intact.” This same threat was voiced one day before the detailed nuclear outline was signed in Lausanne, Switzerland when Obama’s press secretary, Josh Earnest, after being asked by a reporter what if the negotiations fail, emphasized, “There is, of course, a military option that’s sitting on the table.”

And the military option is on a table that has an expensive nuclear centerpiece called the B61-12. A so-called LEP (life extension program) of earlier B61 designs, the B61-12 is a nuclear smart bomb specifically designed as an earth penetrator. According to Hans M. Kristensen, Director of the Nuclear Information Project of the Federation of American Scientists, the B61-12 is a new nuclear weapon with improved military capabilities, and is “the most expensive nuclear bomb project ever.” The development of this B61-12 smart nuke places the US squarely in violation not only of its own 2010 Nuclear Posture Review, but also Article 6 of the Nuclear Non-Proliferation Treaty, which commits the US to “pursue negotiations in good faith on effective measures relating to cessation of the nuclear arms race at an early date and to nuclear disarmament, and on a treaty on general and complete disarmament under strict and effective international control.”

And as if the B61-12 nuclear “device” were not enough, the Pentagon has unveiled the improved Massive Ordnance Penetrator (MOP) GBU-57A-B, a 30,000 lb. conventional-explosive bomb speci

fically designed to target Iran’s hardened nuclear facilities. Why spend obscene sums of money to develop bigger and better bunker buster bombs if indeed the Washington regime seeks peaceful relations? The answer seems obvious that Washington has no such peaceful intentions. By accusing Iran’s civil nuclear program of having a weapons dimension while simultaneously providing political cover for the Israeli entity’s very real nuclear weapons program, US leaders are obviously talking out of both sides of their imperial mouths.

As insane as this may sound, Andrew C. Weber, US assistant secretary of defense for nuclear, chemical and biological defense programs, insists that “maintaining a safe, secure and effective nuclear stockpile is critical to deterring potential adversaries and assuring US allies and partners.” Perhaps Ayatollah Khamenei had this in mind in addition to Dempsey’s recent threat when he commented, “On the one hand, they bluff this way and on the other, they say the Islamic Republic of Iran should stop its defense progress, which is an idiotic remark.” Undeniably it is idiotic, and in view of these stark realities, Iran would be foolish not to deploy the S-300 missile air defense systems against the American aggressor. The Leader wisely instructed all of Iran’s Defense Forces to “boost their military and defense preparedness as well as their combat readiness” in his April 19 speech before Iranian military leaders.

“Over the past 250 years, Iran has not waged a single war of aggression against its neighbors, nor has it initiated any hostilities,” political scientist and former advisor to Iran’s nuclear negotiating team Dr. Kaveh L. Afrasiabi reminds us. Without a single nuclear weapon and no intention of acquiring one, Iran is clearly not threatening world peace. It is the hypocritical US along with eight other nuclear-armed states, which still possess over 10,000 nuclear warheads, who are collectively threatening our planet. How can Iran trust such a nation?

This article was written by Yuram Abdullah Weiler for Press TV on Apr 22, 2015.