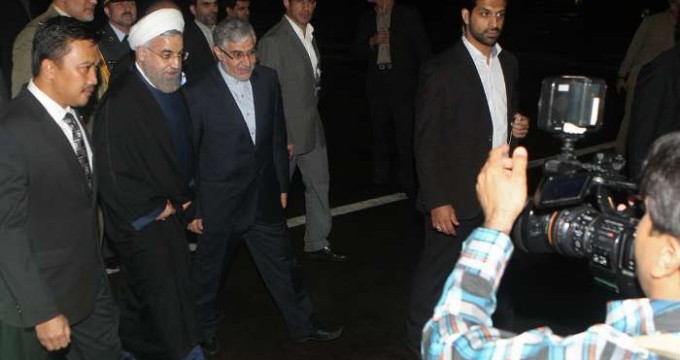 The Iranian president traveled to the southeastern Asian country on Tuesday to attend a ceremony marking the 60th anniversary of the AAC.

Upon his arrival, the Iranian president was welcomed by Indonesian and Iranian officials including Iran’s Ambassador to Indonesia Valiollah Mohammadi Nasrabadi.

Rouhani’s visit comes at the invitation of his Indonesian counterpart, Joko Widodo.

Rouhani is scheduled to deliver a speech in the public session of the gathering on Wednesday morning and is set to preside over one of the sessions of the heads of state.

Shinzo Abe, the Japanese prime minister, and Widodo are among the senior figures the Iranian president plans to meet on the sidelines of the ceremony.

Rouhani will also sit down for talks with Indonesian scholars, professors, Islamic clerics, businessmen, and merchants.

The five-day conference, which included a ministerial meeting on Monday and a business summit on Tuesday, will end on Friday, with heads of state heading to Bandung in West Java Province to commemorate the original gathering.

According to Indonesia’s Foreign Ministry, 33 heads of state and representatives from 77 countries have confirmed their participation in the summit and the commemoration event.

The AAC set the stage for the establishment of the Non-Aligned Movement (NAM), whose rotating presidency is currently held by Iran.