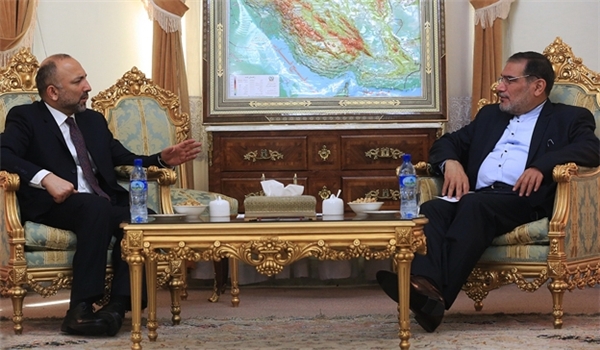 TEHRAN (FNA)- Secretary of Iran’s Supreme National Security Council (SNSC) Ali Shamkhani in a meeting with Afghanistan’s National Security Advisor Mohammad Hanif Atmar in Tehran on Monday lashed out at certain countries for making an instrumental use of the terrorist groups to justify their military and political meddling in other countries.

“Terrorism has always been a tool at the hands of some countries to justify their military, economic and political interference,” Shamkhani said.

The top Iranian security official expressed regret over the death and injury of tens of Afghan citizens in the recent terrorist attacks in their country, and said, “Spread of insecurity and terrorism is the old policy of some big powers to ruin national capacities and the situation of the Muslim states in the region.”

Shamkhani said that the spread of war in the regional countries threatens security, stability and long-term interests of all countries, and called for immediate halt to air and sea attacks on the defenseless people of Yemen.

“The airstrikes have ruined the infrastructures, hospitals and homes of civilians while the military bases of Al-Qaeda that are the main threat to Yemen and the region have not been attacked yet,” he added.

In relevant remarks on Sunday, Iran’s Supreme Leader Ayatollah Seyed Ali Khamenei said the country deplored the Saudi attacks on Yemen, but it didn’t meddle with the domestic affairs of the regional states.

“Such allegations are not real since Iran hasn’t and will not interfere in other countries’ issues,” Ayatollah Khamenei said, addressing Army officials and personnel on the occasion of the Army Day in Tehran.

“We feel hatred and disgust for those who attack the civilians, women and children and believe that they are not aware of Islam and human conscience, but we don’t meddle in other countries’ affairs,” he added.

Ayatollah Khamenei further lamented the ongoing incidents in Yemen, and said the US and other western states’ support for the aggressive state is an instance of those US and western policies that widen insecurity in the world, and said, “Unlike the powers that have no (self-) control, the Islamic Republic of Iran sees security as God’s most important grace and stands to safeguard and defend the security of its own and of others.”

Ayatollah Khamenei’s remarks came as Saudi Arabia has been striking Yemen for 26 days now to restore power to fugitive president Mansour Hadi, a close ally of Riyadh. The Saudi-led aggression has so far killed over 2,730 Yemenis, including hundreds of women and children. The attacks have also left thousands of people injured.

Also on April 9, Ayatollah Khamenei warned the Saudi rulers that continuing the war against the Muslim people of Yemen would entail dire consequences for them.

“The Saudis will definitely be struck back in this issue and their nose will be rubbed against the ground (they will be defeated),” Ayatollah Khamenei said, addressing a large number of Iranians in Tehran.

“This action (of the Saudis) is not acceptable in the region and I warn that they will certainly lose interests,” he added.

Ayatollah Khamenei said that the Saudis used to show more self-restraint and sobriety in their foreign policy, but now the affairs in the Arab country were controlled by a number of inexperienced young people who wanted to show savagery instead of patience and self-restraint, warning that the present trend of policy in Riyadh would certainly harm the Saudi officials.