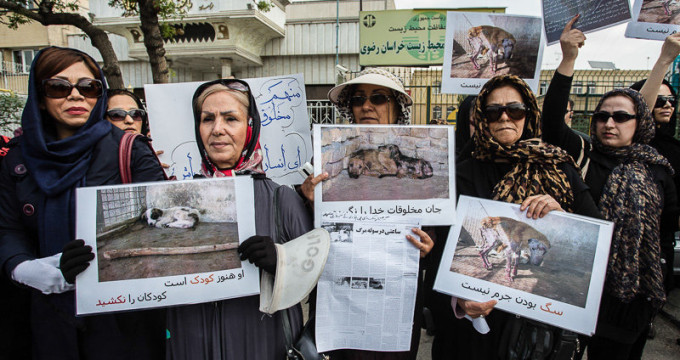 Iranians held protests in major cities across the country after a gruesome video surfaced online of the killing of stray dogs in an industrial park in Shiraz. The three-minute grainy video with audio shows men in masks injecting a number of dogs with a syringe. Some claimed the dogs were injected with acid or poison. None of the men were wearing government uniforms, but Iran has long had a problem with stray dogs and many cities have outsourced the task of collecting strays to private contractors.

One of the largest protests was held April 19 outside Tehran’s Environmental Protection Organization (EPO), where dozens of animal rights activists asked EPO head Masoumeh Ebtekar to pursue the case. Ebtekar addressed the protesters, saying, “Animal abuse is unacceptable under any condition and we are pursuing the case.” She added: “The general director of Fars Province for the EPO said that syringes have been found but some of the issues of the case are not clear because the municipality [of Shiraz] denies the story.”

Ebtekar said EPO “has laws for wildlife but does not have laws that pertain directly to dogs and cats. Therefore, we are trying to specify a framework of laws to support animal rights so that in such a case as this, responsibilities are clear.”