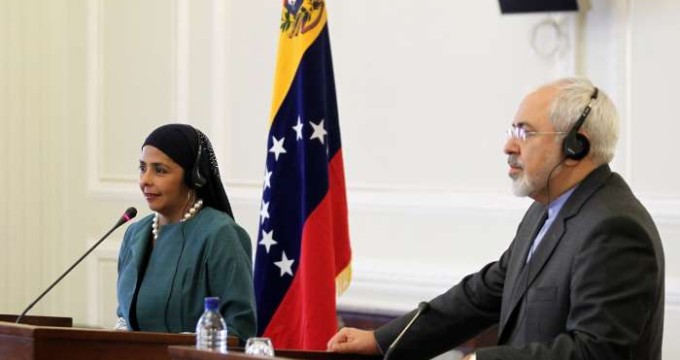 Iranian Foreign Minister Mohammad Javad Zarif has expressed regret over some countries’ attempts to depict the Yemeni crisis as a religious conflict, saying Saudi Arabia’s war on Yemen has nothing to do with religion.

“In Yemen, popular groups are being attacked and these assaults do not pertain to their faith,” Zarif said in a Monday meeting with Venezuelan Foreign Minister Delcy Rodriguez and Oil Minister Asdrubal Chavez in Tehran.

The Iranian minister added that such attacks have been carried out against civilians in Yemen as the country has no military structure.

He also warned that extremism and terrorism pose a real threat to the region and criticized certain countries for failing to cope with them.

Iran’s top diplomat said his four-point peace plan recently submitted to the United Nations on the ongoing crisis in Yemen includes the establishment of ceasefire, dispatch of humanitarian aid, the holding of national dialog without any foreign interference and the formation of a popular government.

Saudi Arabia started its airstrikes against Yemen on March 26 – without a United Nations mandate – in a bid to restore power to the country’s fugitive former president, Abd Rabbuh Mansur Hadi, a staunch ally of Riyadh.

Al-Qaeda-linked militants prepare to launch attacks on Houthi fighters near the airport in the southern Yemeni city of Aden on April 20, 2014. © AFP

According to reports, more than 2,700 people, including women and children, have so far lost their lives in the attacks.

In a letter to UN Secretary General Ban Ki-moon on April 17, the Iranian foreign minister proposed the four-point peace plan on Yemen in an attempt to end the bloodshed in the impoverished Arab country.

Zarif further stressed the importance of improving ties between Iran and Venezuela in political, economic and energy fields.

“The Islamic Republic of Iran supports Venezuela’s policies and plans within the framework of OPEC,” he said.

He further noted that Iran is implementing plans to reduce its reliance on oil revenues.

Iran and Venezuela are member states in the Organization of the Petroleum Exporting Countries (OPEC).

The Venezuelan foreign minister, for her part, said her country is keen on bolstering ties with Iran in all fields, particularly on regional and international issues.