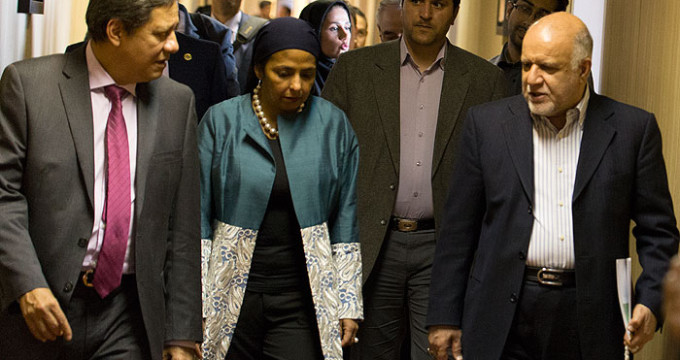 During the meeting on Monday, Zanganeh said that OPEC members should prepare the ground for increase of Iran’s oil production.

He underlined that Iran wants to increase its oil production to the levels existed before the sanctions.

Iran’s oil minister hailed Venezuela efforts for returning balance to the oil market and underlined joint action of OPEC members in this regard.

During the meeting, Venezuelan foreign and oil ministers briefed Iranian oil minister and welcomed expansion of all out ties with Iran.

Iranian President Hassan Rouhani has also during his meetings with the OPEC members’ officials urged them to return balance to the oil market.

The president has said that OPEC members are needed to launch collective efforts to defuse the plot hatched by certain world powers to decrease oil prices.

The Iranian president has always underlined that the present oil prices are against both the interests of the oil producing countries and balance in the world market.

Undoubtedly, cooperation among the aligned countries in the OPEC can both defuse the plots of certain powers against the organization and help stabilize an acceptable price for oil in 2015,’ Rouhani said in a meeting with his Venezuelan counterpart Nicolás Maduro in Tehran in January.