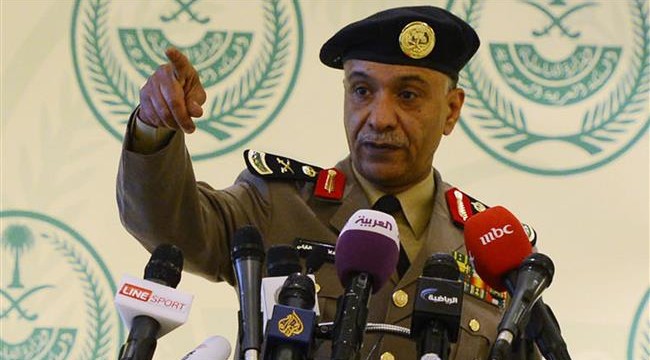 Saudi Arabia has put security forces on alert over threats of an imminent attack on its oil and business infrastructures as fears are growing about the potential repercussions of the kingdom’s military aggression against neighboring Yemen.

“There was information about a possible act targeting a mall or Aramco installations. We passed this information to the security forces to be on alert,” Spokesman for Saudi Arabia’s Interior Ministry Mansour Turki said on Monday.

The development came as the kingdom is becoming increasingly exposed to security threats in the wake of its decision on March 26 to launch an unlawful military aggression against Yemen. The attacks, which have claimed the lives of more than 2,600 people, were meant to undermine the Ansarullah Houthi movement, which currently controls the capital Sana’a and most of other provinces.

Earlier in the month, two Saudi police officers were injured in an attack in the Saudi capital, which led the officials to beef up security measures in Riyadh. Nine members of Saudi security forces have been also killed in a fire exchange with Yemeni forces along its southern border.

Turki, however, denied that the threats have anything to do with Riyadh’s aggression on Yemen, saying, “Saudi Arabia is targeted by terrorism. Usually in such situations (conflicts), there are attempts by terrorist groups to take advantage and carry out attacks.”

The world’s largest oil exporter, Saudi Arabia is highly fearful of reprisal attacks by Houthi fighters against its oil installations.

File photo shows a Saudi Aramco oil installation known as “Pump 3” in the desert near the oil-rich area of Khouris, 160 kilometers east of the Saudi capital, Riyadh. ©AFP

Earlier in April, a senior leader of Yemen’s Ansarullah movement said the revolutionaries have become capable of targeting oil installations in Saudi Arabia.

According the Yemen Press, Ojaylaki said if carried out, the missile attacks would force Saudi Arabia to change its strategy in its ongoing aggression against Yemen, adding that the missiles should be viewed as a strategic threat for Saudi Arabia.

The Houthi official further noted that Arab intelligence services are incapable of identifying the location and the number of the advanced missiles, which he said, are known for their “precision and strengths.”

Houthi fighters continue making advances south of the country while they have made gains in fighting terrorist groups like al-Qaeda. The fighters said after reaching Sana’a last September that the government of fugitive former president, Abd Rabbuh Mansur Hadi, a close ally of Riyadh, was incapable of properly running the affairs of the country and containing the growing wave of corruption and terror.