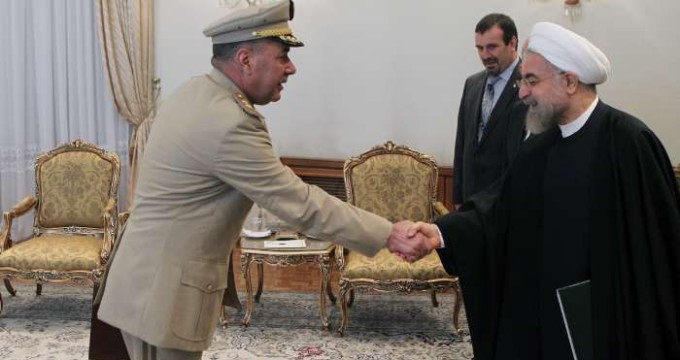 TEHRAN (Tasnim) – Iranian President Hassan Rouhani on Monday referred to Israel as the main threat in the region, and called on all countries to pressure the Zionist entity to respect international regulations.

The Zionist regime is the main threat in the region in terms of weapons of mass destruction, Rouhani said in a meeting with new Algerian Ambassador to Tehran Ahriz Abdelmoun’aam.

All countries should step up political pressure on this regime to make it abide by international regulations, he stressed.

The Iranian president underlined that region and the world should be free from weapons of mass destruction.

Israel is the only possessor of nuclear weapons in the Middle East with estimates of 200 to 300 atomic warheads.

The Tel Aviv regime has not joined the Treaty on the Non-Proliferation of Nuclear Weapons (NPT) and has never officially admitted to having nuclear weapons.

Elsewhere in his remarks, Rouhani appreciated Algeria’s “good stances” on Tehran’s peaceful nuclear program in recent years, saying, “The two countries share the view that all states can enjoy peaceful nuclear energy within the framework of the NPT.”

Abdelmoun’aam in this meeting submitted his credentials to Rouhani and conveyed the greetings of the Algerian president to Iran’s chief executive.

The agreement is an important step towards maintaining peace in the region and the entire world, the Algerian ambassador noted.

On April 2, Iran and the Group 5+1 (the five permanent UNSC member states plus Germany) reached a framework nuclear agreement after more than a week of intensive negotiations in Lausanne, Switzerland, with both sides committed to push for a final, comprehensive accord until the end of June.