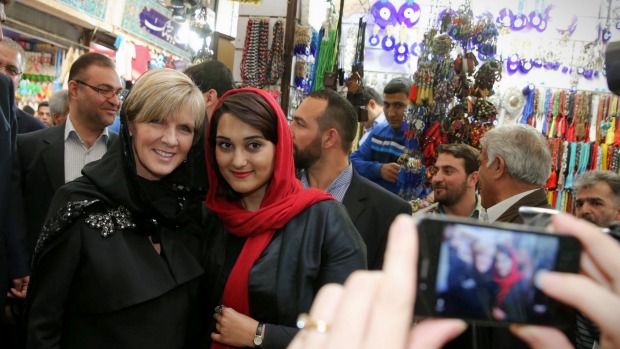 Tehran: The sight of a politician smiling and chatting with people on a march though an Australian shopping mall is a staple of political campaigns.

However, for the crowds jammed along the narrow alleys of Tajrish bazaar in northern Tehran, the sudden appearance of a gaggle of cameramen around Julie Bishop as she looked at rows of coloured spices and shops full of hanging trinkets seemed to come as a jolt. Western politicians are a rare sight in Tehran, let alone walking the streets. Yet, news of Bishop’s trip to Iran had clearly spread.

“Australia?” a local woman asked as the Foreign Minister moved past a stall.

When I asked how she knew, the woman waved: “Television, television.”

Bishop had appeared at a media conference with Iran’s Foreign Minister, Javad Zarif, a few hours before and the story had made it to local screens.

Iran hopes to ease the international isolation of the country, and while Australia has no role in nuclear talks with major world powers, Bishop’s presence in the capital has provided a chance for the government to show Iran coming in from the cold.

However, the semi-impromptu walk through the market was her idea, to be seen mixing with locals.

“Clearly, the sanctions are taking their toll, but day-to-day people are getting on with their life,” Bishop said.

While sanctions are a restriction on Iran’s vast oil and gas deposits, Australia does about $330 million in trade with Iran each year, mostly in wheat sales and carpet imports.

Tajrish bazaar is in the more affluent area of the city, close to towering mountains capped by snow, even in spring.

Should the thaw in diplomatic relations with Iran follow a successful nuclear deal in the months ahead, Bishop won’t be the last Western politician to find out what Iran’s markets have on offer.